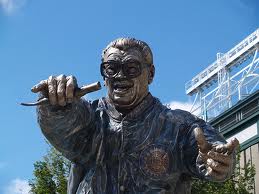 On the North Side of Chicago, there is a statue of Harry Caray, and on the south side there is an owner who refers to Harry and “scum.”

The Chicago Cubs are a bad baseball team without a compelling player or hope of contending for the postseason in the foreseeable future, and they will still draw 2.5 million fans this year.

Through 48 home dates, the Cubs have averaged 33,000 tickets sold, and the reason tracks all the way back to a decision White Sox owners Jerry Reinsdorf and Eddie Einhorn – that Harry Caray needed to go.  Caray also decided that with the launch of Sportsvision – an Einhorn owned cable channel that would have charged a pay-per-view fee for each game if not for fan backlash – Caray decided that broadcasting to 22,000,000 homes across America on WGN – one of America’s first superstations on cable – was a hell of a lot better that 50,000 in Chicago on Sportsvision.

For fans in attendance, Cubs games are less about what happens on the field than the benchmarks that make going to the game fun, and chief among those continues to be the singing of “Take Me Out to the Ballgame” during the seventh inning stretch – a tradition that Caray brought with him from the Sox when hired prior to the 1982 season.

Caray’s broadcasts were filled with errors, but his passion and understanding of how to bond with fans made him incredibly popular wherever he worked, and there is no statue outside Wrigley Field better earned than Caray’s.  No matter the level of baseball being played, the traditional and joyful rendition of baseball’s anthem is a centerpiece to each game for fans.

The White Sox lack of understanding about what engages fans continues to cost them at the gate 32 years after deciding that they were better off without Caray.  Prior to Caray coming to Wrigley, the Cubs had never drawn 1.7 million of more fans.  From Caray’s third year with the Cubs (1984) through 2012, the Cubs have drawn more than that every single season, and have been below 2M only three times.  Caray didn’t do it alone.  Without the exceptional reach provided by WGN – one of America’s first superstations on cable – Caray would  not have had the profound impact he did.  But without Caray, WGN wouldn’t have had its first national star.

The importance of earning a spot in the postseason in 1984 for the first time since 1945 also played a huge role in the in the explosion of popularity for the Cubs, but without Caray, Wrigley would still be full or empty depending the quality of baseball.

The tradition of Caray leading “Take Me Out to the Ballgame” reportedly started when then White Sox owner Bill Veeck noticed Caray privately singing along with Nancy Faust’s organ rendition of the song during the seventh inning stretch, thought Caray’s voice was just bad enough to make fans comfortable as they sang.  Caray didn’t know the mic was on the first time, but quickly embraced the notion of being Comiskey Park’s choir director.

Fifteen years after Carays death, regardless of what else goes on at Wrigley, or how inept the baseball might be – Cubs fans know they will be able to sing along with 30,000-plus brothers and sisters in misery after the top of the seventh, led by a celebrity.

That makes a trip to the ballpark fun.  Harry did that for the Cubs, instead of the Sox, and changed the course of baseball on the northside.  Despite the Cubs and Sox both being terrible in 2013, the Cubs have sold over 10,000 more tickets per game than the Sox.

What might have happened with the White Sox had Reinsdorf and Einhorn hung onto Caray while the Cubs maintained the status quo with the unlistenable tedium of Milo Hamilton we will never know, but the case can be made that the migration of Caray from Chicago’s south side to the north side might be the most important shift of an asset in the history of Chicago baseball.