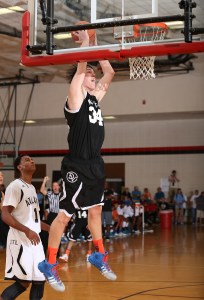 The one player who will intrigue college coaches and fans at the NY2LA Super Jam in north suburban Milwaukee more than any other is Dream Vision’s Stephen Zimmerman, a seven-footer from Las Vegas Bishop Gorman.

Zimmerman just finished playing in Indianapolis at the Adidas Invitational where Indiana offered the 2015 recruit ranked in everyone’s top ten, which is appropriate because Zimmerman is a very similar player to the Hoosiers’ Cody Zeller.

Both run the floor exceptionally well, are generous teammates, and are very well grounded.  And Zeller also played up a class to join Indiana Elite at the same event three years ago.

There are some differences – Zeller was a more polished shooter four years ago, Zimmerman is a little bit more difficult to move around, and Zimmerman has brown hair while Zeller is blond.  Other than that, not many things obviously separate them.

Zimmerman knows he needs to work on being more aggressive, and that was always a challenge for Zeller too.

I spoke to Stephen for a couple of minutes yesterday as he and teammates Noah Robotham and Jamal Aytes watched the championship game they had hoped to be play in when the week started.

Where he stands with recruiting is anyone’s guess, as I don’t ask kids about college.  Where Stephen or anyone else chooses to study and play is none of my business, so I don’t ask about it. As weird as it is to shove a microphone into the face of a high school kid, it’s downright creepy to ask about lists of schools and his decision about a collegiate destination.

What you’ll hear in the interview is a mature kid who cares for his teammates and is very centered about the insanity that surrounds the recruitment of tall people to play basketball for free while coaches make millions.

He’s a smart guy, and he’s going to make one coach very happy, while disappointing many, many others.  That’s not on Stephen – the coaches who push, pull, and prod these kids into choosing them are responsible for their own misery.

Stephen talks about his teammates, and what he needs to work on in the interview below.