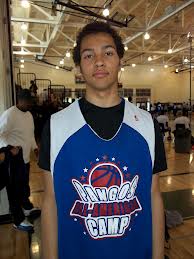 Point guard Noah Robotham of Bishop Gorman High School in Las Vegas is playing with Dream Vision, and last week at the Adidas Invitational, a lot of eyes were on him because his high school and summer teammate Stephen Zimmerman is being recruited by everyone.

Point guards are hard to project because the measurables aren’t always as easy to read for them. For Zimmerman, life is different.  He’s a seven-footer who runs the floor very well and has good hands.  No brainer that everyone wants Stephen.  Noah needs to impress with speed, court vision, shooting ability, and defense this month to earn his opportunities with elite college programs.

He’s right about six-feet tall, and unless you pay attention, his best traits are tough to see.  I watched Dream Vision play five games last weekend at the Adidas Invitational, and Noah impressed more and more with each game.

Great point guards are separated from the ordinary is what separates a good one by the ability to read the defense and make accurate, timely passes.  If a point guard can hit the right teammate on time and on target, that’s a guy who can lead an offense to a lot of wins.

Noah is as good a point guard at making timely and accurate passes as there is in the 2014 class.  That he showed himself in the Adidas to be a very good shooter with a soft touch is a bonus.

The fun of watching summer tournaments is discovering a player you had not heard of before the event starts.  While watching Zimmerman, it was impossible not to notice Noah’s ability to make the team go.  Next stop for Noah, Stephen and Dream Vision will be Mequan, Wisconsin, for the NY2LA Super Jam that begins Wednesday.

Talking to him, I learned exactly what I assumed – he’s a thoughtful kid with a good head on his shoulders.