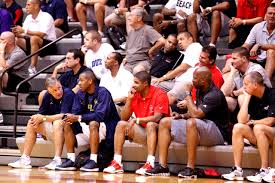 There are a lot of coaches who aren’t very happy with how they spend their Julys, but as long as the kids are, I love it.

The kids playing basketball on a relentless schedule this weekend in Indianapolis at the Adidas Invitational, in Atlanta at the Nike Peach Jam, and in Milwaukee and other cities next week are having a great time.  The big time college coaches who are out in force evaluating them might not like it, and their high school coaches definitely don’t like it.

But the kids love it, and how can that be a bad thing.  Even at the highest level, very few of the kids are going to making a living playing in the NBA, so what could be wrong with a bunch of kids bouncing from hotel to hotel in strange cities they would never see otherwise with their friends.  Once basketball players get to college, the game becomes a 40-50 hour per week job in addition to their academic course load.

College coaches will be calling every shot for some of these kids soon enough.  Having a good time with friends while also playing some basketball against some of the best in the country is a great way to spend a couple of weeks in July.

I’m a big fan of summer basketball, and feel like it is a great way to learn a few things about players, even if it’s not perfect..  If you follow one team as I did with Dream Vision (with Stephen Zimmerman, Jamal Aytes, and Noah Robotham ), you generally get to see kids at their best and worst once, and closer to the mean during the rest of the games.  You get to see how they respond to success and failure, and how much they love the game.

Zimmerman (a 2015 recruit playing up a year) wasn’t great every game, but he showed all of the stuff that has made the seven-footer a target for every major program in America.  He reportedly picked up an offer from Indiana this weekend, and rightly so.

If a kid doesn’t absolutely adore playing basketball, by the end of the July tournaments, you’ll see it.

There are a few things you don’t see – good coaching is near the top of the list.  There are a few guys who know what they are doing, but that’s the exception, not the norm.  It’s hard to keep the attention of 16 year-olds during that ninth game, and equally difficult for the coaches to not have a few lapses themselves as they lead teams in games against different competition every six waking hours while in town.

Speaking of the coaches, the coaches for the big programs like Tom Crean, Coach K, Larry Brown, and Steve Alford were long gone before this mess today.  They aren’t trying to figure out whether a kid can play well during his fifth straight day of playing one or two games.  They need a kid to play well twice per week.

There is a lot of debate as to whether the summer schedule is beneficial for the players, and from a basketball perspective, there is no way that it improves their level of play as much as a good month of well run workouts.  There is more to life than excelling at basketball though, and the travel and friendships emulate the positive aspects of the kind of summer camp experience in which future collegiate basketball players cannot indulge.

Lifelong friendships are born at the Drury Inns near where these events are held.  The result of the tournament is not the point, and neither is the development of the players.  The coaches who use the Adidas Invitational as evaluatory tools are likely not too pleased with the format either, but kids get to play ball and hangout together.  That makes it valuable to them, and with the number of things in their lives that are just for them, and just for fun about to be shaved to zero when they play in college, there is nothing wrong with a little frivolous hooping and hours of nothing to do with friends to keep them occupied.