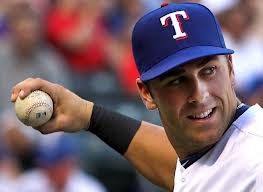 There are reportedly two other players to be named that will come to the Cubs in return for the injury prone and well-traveled Garza.

For a guy who will be a free agent in ten weeks, the Cubs could have done much worse but likely no better.  Olt could be the third baseman in Chicago for a generation while Edwards is a wild card who’s getting people out with regularity in A ball.

There will be two more prospects according to Chicago reports that will help stock a still depleted Cubs farm system.  To be fair to the Rangers, Olt was never going to displace Adrian Beltre.

The Cubs under what passed for leadership under then General Manager Jim Hendry were regularly on the other end of fleecings, including the trade that brought Garza to the Cubs in an ill-considered attempt to catch lightning in a bottle and save his job.

Garza would never have been resigned by the Cubs as they are unlikely to contend until at least 2016.  The money spent on Garza would have doubled down of the Edwin Jackson money, which would be better handed to Ronnie Woo-Woo to pay down his dental bills.

So the Rangers will get 10-11 starts out of Garza, and the Cubs get five guys, two of which might help once the team is ready to play real baseball.

That is the kind of trade that can help give the organization a boost.

I have no idea where the Cubs think they are going to get the arms needed to stock their rotation and bullpen, but if the young position players develop, there might be a chance for this franchise yet.

If similar deals for Alfonso Soriano, Kevin Gregg, and Nate Schierholtz follow, maybe they find an arm or two that will blossom.

Taking advantage of panicked buyers at the trade deadline is a great way to restock.

As much as I thought the signing of Jackson was a canard designed to give hope to easily duped fans, this trade appears to have been made by people who understand who to build for 2016.