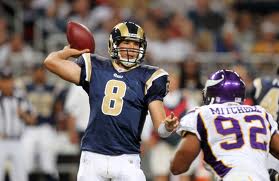 Sam Bradford’s development is key for the Rams to take another leap forward.

The St. Louis Rams have moved a lot of dirt in Earth City, Missouri, over the last 18 months in rebuilding the team that put together the worst five year run in NFL History from 2007-2011.

The fruits of that labor netted a 7-8-1 record in 2012, and another offseason with key additions has put the Rams in a position to take another major leap forward.

It might be a stretch to turn back the clock 29 years to look at a similar rebuilding project five hours north up I-55, but the Chicago Bears after the return of ancient owner George Halas to the front office was similar.

The Bears put together two great drafts in 1982 and 1983 to set the table for an ascension that brought one magical season and nearly a decade of success under another coach with a Bears pedigree and a famous mustache.

Jeff Fisher and Les Snead added tight end  Jared Cook and left tackle Jake Long in free agency, and then brought explosiveness to both sides of the ball by drafting wide receiver Tavon Austin and linebacker Alec Ogletree in the first round.

Austin is a playmaker with great speed and elusiveness who will help regardless of where he lines up, but he will be a profound upgrade returning punts.

Ogletree was an impact player at Georgia with a checkered past, but that formula worked in 2012 with Janoris Jenkins, so going to that well again is logical.  Watching Georgia play defense last year, it was impossible not to notice #9 chasing down ball carriers.  He has speed and enjoys hitting people hard.

The rest of the draft is filled with guys, but one that I like is Barrett Jones from Alabama.  He started at three different spots the last three years in college, and stood his ground with quarterback A.J. McCarron during a dust up in the BCS National Championship Game.

Can Sam Bradford assume the mantle of leadership to lead the Rams?

Rams fans are sharply divided in their assessment of the abilities Bradford has shown in leading the offense during his first three seasons.  Excuses have included Steven Jackson’s unwillingness to cede that role to Bradford, and the rotating door of offensive coordinators.  Well, Jackson is in Atlanta and Brian Schottenheimer is back for a second season.  The Rams have invested high picks the last three drafts to surround Bradford with weapons.

This won’t be a make or break season for Bradford because his contract runs for another two years after this one, and because Fisher seems genuinely confident that Bradford can be the franchise QB he was drafted first overall to be.

There is no doubting his athleticism – he is said to be a +1 as a right handed golfer, and a four handicap as a lefty.  That hasn’t been confirmed, but the stories about his ability to punish a golf ball are legend at Persimmon Woods, where he belongs.

Bradford took very small steps forward in his third season, and needs to take a bigger leap in 2013 for the Rams to close the gap on the 49ers and Seahawks.

How long will it take Austin to become productive?

Wide receivers traditionally take a little bit longer to adapt to an NFL playbook, but the Rams will do everything they can to give Austin a chance to be the gamebreaker they drafted #8 overall.  They will use him wide, in the backfield, in the slot, returning punts, and anywhere else they can exploit his elusiveness.

Austin appears to be diligent and clever enough to embrace the high expectations the Rams have in him.  The better question might be whether he can stay healthy given his small frame, and the  pounding he will take every time he is caught by a defender.

The 28-year-old Long missed four games in 2012 after missing two in 2011.  That trend needs to reverse for the Rams to be successful in 2013.  With Long at left tackle and Rodger Saffold on the right side, Sam Bradford has a chance to reduce his ridiculously consistent sack numbers (34 as a rookie, 36 his second year, and 35 in 2012).  More time means better choices, less picks, and more big plays.

the interior of the line is in better shape than in previous years with center Scott Wells, Harvey Dahl, Shelley Smith, Jones, and Chris Williams fighting for playing time.

Who the hell is going to play safety?

Almost anyone will be an upgrade as a starter for Craig Dahl.  No doubt Dahl gave great effort, but the number of over the top plays allowed because of Dahl’s lack of speed was stupefying.  Quintin Mikell was a good run stopper, but he’ll turn 33 in September.  He’s still out on the market after the Rams.

The players on the depth chart at safety as of today are Darian Stewart and Rodney McLeod.  The Rams drafted T.J. McDonald in the third round of the 2013 draft out of USC, and he could wind up starting in place of McLeod at free safety.

The biggest question mark for the defense when the season ended seven months ago remains unanswered.

Is a repeat of the 4-1-1 division record a realistic goal in the loaded NFC West?

Only a psychotic would have predicted 4-1-1 against the West in 2012, but that was exactly what the Rams tallied against the 49ers, Seahawks, and Cardinals.  Experts believe all three have improved, so the question becomes, have the Rams improved more.  They were the youngest team in the NFL last year, and have said goodbye to two of the elder statesmen in Jackson and Mikell.

Is the ceiling for the development of the young players high enough to win at the level Rams fans crave after so many years of national irrelevance?

I think so.  The staff assembled by Fisher and Snead is one of the best teaching groups in football, and the players seem willing to listen.  This is going to be a very good team in 2013.  Let’s take a look at the schedule:

September 8 vs. Cardinals  Win – Carson Palmer is not the answer for Bruce Arians

September 22 @ Cowboys  Win – Rams are due against Pokes

October 28 vs. Seahawks  Win – The Rams better get this one because winning in Seattle is a long shot.

November 3 vs. Titans  Win – No way Jeff Fisher allows his former employer to beat the Rams.

November 10 @ Colts  Win – This is a toss up between two QBs who are measured against each other because of draft position.

November 24 vs. Bears  Win – The Bears are in transition, and the Rams will win at home.  Side note – Rams fans be ready to deal with the worst travelling fans in the NFL.  Bears fans are hideous drunks.

December 8 @ Cardinals  Loss – The Cardinals will be tough at home

December 15 vs. Saints  Loss – The Saints will avenge their brutal 2011 defeat.

December 22 vs. Bucs  Win – The Bucs aren’t very good, and the Rams should beat them at the Jones Dome.

December 29 @ Seahawks  Loss – Seahawks in Seattle is the toughest road game in the NFL.

So that gives us 10-6 against one of the toughest schedule in football.  That is going to be the cut line for the playoffs, and the Rams might need to win a tiebreaker to make the playoffs for the first time since 2004.

Are these rock solid picks, or simply guesses?  Let’s see how the season plays out before I answer that.  I might have been a little pessimistic, but a 2 1/2 game jump seems about right for a team this young.