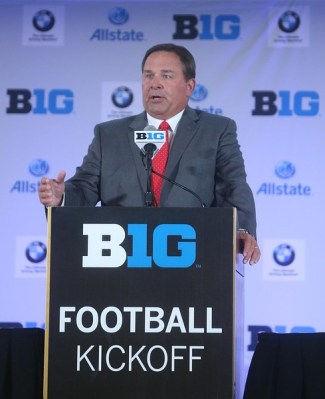 It wasn’t hard to listen to Indiana University Football Coach Kevin Wilson, and figure out what he likes about his third team while in Bloomington.

Everyone in college football is optimistic, but few are quite this effusive.  The last time I heard an IU football coach communicate with this kind of positive energy was Bill Lynch telling me that the Hoosiers were only 12 plays away from being undefeated the previous season.  What he didn’t say is that’s true for virtually every team in football.

Four months later, after a 4-8 record that included an 83-20 mauling at Wisconsin, Lynch was gassed and Wilson was hired.

Coaches need to be as careful about building expectations among the fan base as IU students need to be about writing checks they can’t cover – not that I ever bounced a check at the IGA.

There is some well earned doubt among fans that Indiana much overcome.  The recruiting classes have been better under Wilson, but clearing the bar set by predecessors is jumping over a garden hose.

Wilson put together the #38 recruiting class in college football last year with five four-star recruits, or four more than I can find going back a decade.

He did seem genuinely excited though, “There wasn’t one day in spring practice that I wanted it over. (Never once) I thought we went through the motions,” Wilson said.  “We’re getting more physical. We have a lot of kids now that are going into their third year of playing because we played 16 freshmen two years ago, and 11 freshmen last year.”

The Hoosiers return 19 starters and all three specialists.  At most schools, that would be reason for wild speculation about a trip to the highest level of bowl, but at Indiana, the Heart of Dallas Bowl would be a historic marker for the program.

The Hoosiers have gone to one bowl over the past 20 years – an 49-33 Insight Bowl loss to Oklahoma State during the season after the tragic passing of coach Terry Hoeppner.

To give some historical perspective to the legacy of terrible football that Wilson is trying to correct, since Bill Mallory was fired after the 1996 season the Hoosiers have posted a Big Ten record of 27-101, and a 3-13 record against Purdue.

Whether the job of getting Indiana back on track, well, wait a minute.  Indiana has never been ‘on-track’, if ‘on-track’ is defined as winning in the Big Ten.  Exactly none of the coaches in Indiana Football history has posted a winning record in their careers against Big Ten opponents.  Bo McMillin was an even 34-34-6 from 1934-1947.  Since 1951, no coach at IU has won 40% of the Big Ten games he has coached.

Winning at Indiana is about more than “energy” and “hard word”.  It’s about recruiting players who can run very fast, and hit very hard.  Wilson says he has more of those guys than in the past, “Might be some growing pains, but we’ll be growing with guys that are faster and more talented. That’s exciting to me.”

There’s that word again.  It’s going to take some on field success for it to translate to fans, and that doesn’t mean beating Indiana State and Bowling Green.  Being a top tier MAC team might represent progress in Bloomington, but it’s far short of an acceptable long term result.

Just read what I wrote, and my aim is not to be cheeky or negative, but to temper the wild optimism that Wilson expressed today.  He had no choice, because that’s part of his job at Big Ten Media Day, but building Indiana’s football program has been historically difficult to the point of being virtually impossible.

Bill Mallory found a way to take Indiana to six of its nine bowl games in a seven-year period.  Minus that stretch, John Pont took Indiana to the 1968 Rose Bowl, Lee Corso won the 1979 Holiday Bowl, and then there was Lynch’s ill-fated trip to Tempe.

Then again, if you had told me four months ago the Indiana Baseball would go to Omaha for the College World Series, I would have laughed.

Great accomplishments start with belief by the architect, and unless Wilson is a better actor than I would guess he is, the Hoosiers have that covered.