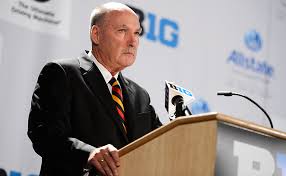 It sounds easy, giving student-athletes a little cash each week for expenses not covered by a scholarship.  It sounds like the absolute right thing to do.  Being an athlete in college is all consuming, and having a job in the dorm cafeteria isn’t possible because of the investment of time in the pursuit of athletic and academic excellence.

Yesterday, at his Big Ten Football Media Day address Commissioner Jim Delany called for the NCAA to implement a stipend for all Division One student-athletes.

Kids need to do laundry, eat when the cafeteria is closed, and take a date to the movies once in a while.  Parents don’t always have the cash to cover those expenses, so Delany wants the schools to be able to kick in a few bucks a week.  Who can argue against that?

The smaller schools can and do argue against it with vigor.  Non-FBS athletic programs can’t afford $80-$100 each week for each athlete, so the universities that do have enough money are prohibited by NCAA rules from paying players an allowance.

Schools in the SEC, ACC, Pac 12, Big 10, and Big 12 would all like to pay their athletes because it’s the right thing to do, and for some ancillary reasons, most of which are more than a little self-serving.

Schools in the non-FBS conferences can’t pay the stipend because you can’t get blood from a turnip.

When Delany says that he champions paying a stipend to athletes, what he’s really saying is that he wants a separate NCAA division created for the members of the five conferences who live in a completely different universe from the smaller conferences.

Change comes with difficulty at the NCAA headquarters in Indianapolis, and this kind of  fundamental adjustment to the bedrock of college sports would have ripple effects that would profoundly and adversely effect the economics of schools in the Missouri Valley, Atlantic 10, Big East, Horizon, and other leagues that feature profitable men’s basketball programs.

An $80-$100 per week payment to all athletes wouldn’t be enough money for any one kid to get rich, but it would be a significant advantage in recruiting to schools that offer stipends for every sport.  If two companies offered me a similar professional experience, but one threw in an extra $5K, I’m taking the gig with the extra $5K for the same reason that if I saw a $20 on the street I would pick it up.  Some money is better than no money, and more money is better than less.

None of that takes into account the effect $5K per year would have on transfers from a conference like the Horizon League to the five major conferences.  A basketball player at Cleveland State whose family lives paycheck to paycheck would likely jump as soon as he got word that there might be an offer for him at an FBS program, and that would be true for every player at every school in every sport.

That’s the market economy at work, and it’s rightly what Delany wants.  Were he the commissioner of the Horizon League, Delany would campaign against such a change with every breath.  Today’s relative equanimity in men’s basketball and non-revenue sports would be replaced by a competitive landscape that would make the existence of a Butler program that could earn a spot in the NCAA Championship virtually impossible.

And that’s good for the Big Ten.

The trump card for Delany is that it’s also the morally correct answer.  Not compensating student-athletes with enough cash to take a girl out on a Friday night or do his or her laundry while coaches like Tom Crean, Urban Meyer, Nick Saban, and Mike Krzyzewski put $3-$6 million per year in their pockets for coaching them is preposterous.

The end game for the big schools is a complete divorce from the small schools because including them in the same division in any sport is of no economic use for them.  An NCAA Basketball Tournament that would be an all-skate for the 62 (probably moving to 64) teams in the Big Ten, Big 12, SEC, ACC, and Pac 12 would be far more profitable for those schools than allowing 35-40 of the non-FBS schools into the dance.

Everything that spills from the lips of the commissioners during football media day addresses has to do with cash, but at least with Delany there is a first-person level of understanding that comes from his experience as a student athlete at North Carolina.  Delany spoke about the decision to eliminate the laundry money in 1972, “The first thing they did was they cut out the $15 a month laundry money.  Now, I had graduated two years before, but I can tell you that $15 a month was about two‑thirds of my cash between the money I got from my mom and dad at home and that $15.

“So I wasn’t in school.  But if I had been an athlete I would say, ‘Why are you cutting out the $15?’  Because at North Carolina, we played in full houses every night.  We played with pros and every game was televised, and we didn’t get $15 a month.  But now that we’re revisiting 45 years later, it’s never too late to do the right thing.”

It’s nice that the right thing is also what would create a new NCAA division that would allow the big conferences to be even more profitable, so your level of cynicism will determine whether you believe Delany’s heart is pure.