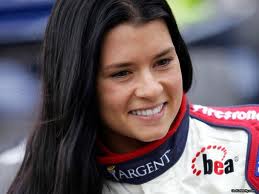 Danica Patrick hopes to smile on Saturday and Sunday at the Indianapolis Motor Speedway, and I hope she has reason to.

When she was young, Danica Patrick was an unrelentingly sour personality at the Indianapolis Motor Speedway.  Whether it’s because of maturity or working with a team of PR pros, she has relaxed a little bit despite being a target for criticism from fans and media during every race.

Other drivers have had the opportunity to grow and develop without being the most famous person on the track, but since moving to stock cars, Patrick has answered every challenge with a smile.

In today’s Indianapolis Star, Bob Kravitz interviews the oft-ridiculed Patrick, and as usual, it’s impossible not to admire her tenacity.

She is utterly alone on and off the track, and loneliness is tough, even when compensated so well for the difference that separates her from the rest of the good ol’ boys at the Indianapolis Motor Speedway this weekend for the 20th running of the Brickyard 400.

It’s tough being alone, unaccepted, and in many cases unwanted.  There is a jealousy among drivers for the cash and exposure she receives, which they believe is totally out of proportion with her results.

Marketing is not about results, though.  It’s all about exposure, and when you are the only one of something, that is always more interesting than someone who is among many.  Tiger Woods is the champion golfer who is multi-racial, so he is worth trucks filled with cash to advertisers, even if (and maybe especially because) he had a serious departure from socially acceptable behavior.

Patrick hasn’t indulged in a ride on the crazy train Tiger boarded a few years ago, but she’s still a unique combination of pretty, feminine, and fast, so she gets big checks from companies like Go Daddy, Peak Anti-Freeze, Tissot, and many others.

That doesn’t mitigate the consistent and obvious difference between Patrick and everyone else.  Anyone who moved to a new city a school as a kid knows what it’s like to be judged as different, new, and without regard to anything but visceral criteria.

It’s tough to fight through the judgment to perform at a high level, and redefine your brand every day.  Patrick has never known a different life as a woman in racing, so she’s calloused to it at this point, but when a knucklehead like Kyle Petty attacks, and then questions follow at every turn about the attack, it has to grate on a person’s soul.

Petty is no dolt.  He knew that his comment would increase his exposure, and that’s what the media game is all about, and whether or not he believed the unjustifiably silly rant, both Petty and Patrick benefitted from it.

That turns Petty into the Charles Barkley of racing – a very good thing to be – and Patrick into an even more sympathetic figure.  All attention is good attention where media is concerned (unless you are facing a murder charge like Aaron Hernandez), but for Patrick it must get old continually being forced to explain why you do what you do.

Kravitz asked Patrick about what she thinks about her on-track performance halfway through her rookie season, and she deferred to the response team owner Tony Stewart gave when she asked him the same question, “He told me, ‘I think you’re doing a good job. If I thought there was a problem or something I noticed you need to work on, I would come over and ask if I could help. But you’re doing a great job and as a team, we have to keep making these cars better for all of us, so I’ll let you know.’ So that’s the best judge. If the boss thinks I’m doing OK, that’s the most important answer.”

Not only is that the ‘most important answer’ from Stewart, it’s a really smart answer from a woman who has been at this media game almost as long as she has been driving race cars.

I’ll root for Patrick on Sunday not just because she’s the square peg surrounded by round ones who is judged either negatively or positively before she ever gets in a car, but because she has learned to use the media for her own benefit rather than seeing them as adversaries – and that makes her damn smart as well as sympathetic.

2 thoughts on “Brickyard 400 – I’m All in for NASCAR’s Loneliest Driver, Danica Patrick”