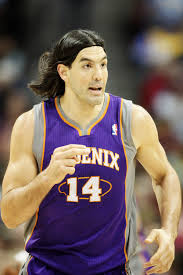 Pacers President Larry Bird wants to win now.  After years of trying to find the right starters for the Pacers, Bird is adding outstanding veterans to fill a second unit that will push the Pacers closer to the Miami Heat in 2014.

Today, Bird added Phoenix Suns power forward Luis Scala to fill out a second unit that has already been helped by the acquisitions of point guard C.J. Watson and small forward Chris Copeland.  The Suns will take Green, 2012 first round pick Miles Plumlee, and a lottery protected first round 2014 pick off the Pacers hands for their trouble.

If Scola plays with the same enthusiasm with which he spoke about the deal today, the Pacers have dealt well, “I’m very, very excited to play for the Pacers,” said Scola. “They are one of the top three teams in the NBA with a good shot to win a championship. I think it’s a great team and this is a great opportunity. I can’t wait.”

Bird made it perfectly clear what Scola’s role will be – as if there could be any confusion that David West in the starter, “Luis will be a very important asset to our team and to our bench.  He has NBA experience, international experience and is the type of player that will fit in nicely on our roster.”

The difference between the moves in previous off seasons and this one is that the Pacers are adding guys who they know can play a specific role.  In the past, they went out and got players hoping they would fit and contribute.

Live in hope – die in desperation.

This change in focus from the Pacers shows Bird’s belief that building is over, and the finishing touches on a winning team is the goal.  The Pacers are good enough so that first round picks who can immediately contribute will not be forthcoming, and luring a top line free agent is difficult in Indianapolis, so finding the pieces to polish the roster is how the Pacers will evolve forward.

The second unit that included disparate parts like D.J. Augustine, Tyler Hansbrough, and Green, has been dismantled like roadies breaking down a stage after a concert, and now the second unit will be manned, barring more moves, by players who are no longer playing to earn starter’s minutes.  Mature players Watson, Copeland, Scola, and Mahinmi will know and happily accept their place as a second unit needed to play hard and well for eight minutes each half.

Potential acrimony exists in the decision coach Frank Vogel will need to make between Danny Granger and Lance Stephenson as a starter to join Roy Hibbert, David West, Paul George, and George Hill.  If healthy, Granger is not going to be happy coming off the bench as he plays for his next contract, and the mercurial Stephenson won’t either.

If that’s the biggest problem Vogel, Bird, and GM Kevin Pritchard face in getting ready for a 2014 playoff run, the Pacers are in great shape.  Too many really good players for too few minutes beats the hell out of too many minutes without enough good players.

Bird is going all in on his young corps of players, and it’s up to them to repay the trust.  If George and Hibbert can take another step forward in their development, and the new pieces mesh, this is going to be a very good team that could become a 60-game winner.

In the Pacers way stand the Miami Heat, who seem to decide at their will when they will dominate anyone in their path, but they were one missed Ray Allen three pointer from losing the NBA Finals in six, and being cast as underachievers ready to be dismantled.

Bird seems to believe the Heat can be had.

Bird has been decisive and confident this offseason.  Come fall, the players will either justify that bravado or face a very unpleasant summer of 2014.  At the end of the journey, Bird hopes is a trip the to NBA Finals.

To get there, George and Hibbert will need to go from good to great, and the rest of the Pacers will need to make Larry Legend look as smart as he feels after a very productive July.