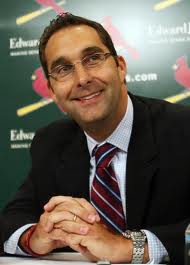 If you want a reason why the improvement of the Chicago Cubs through the Theo Epstein rebuild is an act of futility, it’s because St. Louis Cardinals General Manager John Mozeliak is a really smart guy – smart enough that he won’t allow it.

After a wonderful run to the St. Louis Cardinals 11th World Championship in 2011, GM John Mozeliak and the DeWitt Family had a decision to make – should they pay the best hitter of the previous decade to stay home?  Was first baseman Albert Pujols worth the money he demanded to keep the birds on the bat logo on his chest?

Pujols had been an incredible player through his first 11 seasons in St. Louis, and appeared to be putting together a Musial-esque career at Busch Stadium.  Prevailing wisdom at the time was that you don’t left a statue player walk out the door, but when the California Angels offered a 10-year, $240 million contract, Mozeliak decided the price was too high for a middle market franchise to swallow.

The Angels play in the Los Angeles market, and have a TV deal that allows for occasional aggression/stupidity.  If the Cardinals make a $240 million error, that’s a massive problem that cannot be undone.  The Cards operate on a budget, and a deal that takes Pujols through age 41 – depending upon whether his listed date of birth is accurate – would commit a significant percentage of their cash to a player who during the last five years of the deal would almost certainly be in decline.

Mozeliak decided to let Pujols go to LA, and in doing so pissed off adults, and made children cry.  The smart people got it, and understood that allocating a giant wad of the budget to a guy with some elbow and foot issues would likely have been short-term smart and long-term dopey.

Who knew the decline would come this quickly?

Pujols has been diagnosed with a partially torn plantar fascia in his left foot, and is likely to miss the rest of the 2013 season.  Prior to the diagnosis, Pujols was hitting .258 with 17 home runs, 64 RBIs, 49 runs scored, an OPS of .767, and grounding into a double play a league leading 18 times.

There might have been some tears shed when Pujols packed his family as he loaded up his truck and he moved to Beverly… Hills that is, swimming pools, movie stars!  They have since dried.

That’s almost as smart a move as was made by the guy who won a World Championship, but still managed to accumulate five of the first 59 picks of the following MLB Draft.  Whoops, that was also Mozeliak after the same 2011 season when he passed on Pujols.

Then there was the guy who quietly traded minor league infielder Zach Cox at the 2012 deadline for reliever Edward Mujica, who is now second in the National League with 30 saves – one behind league leader Craig Kimbrel of the Atlanta Braves.  Yep.  That was Mozeliak too.

The Cubs are still selling off parts like their roster is part of an estate sale.  They are acquiring prospects who they hope will restock a pond fished dry by previous GM Jim Hendry, whose idiocy was detailed here for a long time.  We even shipped moving crates to his office in 2011 during a fit of anger as we tried to prompt him to vacate his office.

Now, it’s Epstein’s turn to prove he knows what he’s doing, but he’s going to have to go some to close the difference between the Cubs and Cardinals because while Mozeliak is the lesser known franchise architect, he might be the smarter.

2 thoughts on “Albert Pujols May Be Done for the Year; How Smart Does Cards GM John Mozeliak Look Now?”