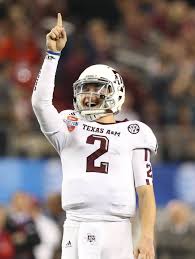 This is the only version of Johnny Manziel that is any of our business, and shame on his Dad for airing family business in ESPN the Magazine.

Nothing good comes from a dad talking to the media about a famous son.  That is especially true when the dad is frustrated.

Paul Manziel is frustrated with his son, Heisman Trophy winner and Texas A&M starting quarterback Johnny, whose life has become fodder for the media since he vented on Twitter and then apparently blew off both steam and responsibilities at the Manning Passing Academy.

Evidently, Paul has decided that speaking to the media is the best tactic in trying to corral his son’s wild side, “(Johnny) still needs love. He still needs guidance. He still needs to see he’s wrong — and how to control his temper. And if I give up on him, who’s gonna take over? The school sure the hell isn’t gonna do it.”

Just as Johnny should backpedal quickly and permanently from his Twitter account, Paul should refrain from airing dirty laundry in public.  As much fun as watching the fabric of a human being unravel like cheap high-top athletic socks, the media should never, ever be sought as an intermediary in a family crisis (Google “Lohan family media” for several hair-raising exhibits that will cause Paul and wife to reassess their decision to talk about their lives to Wright Thompson, who wrote an expose’ for ESPN the Magazine).

Here are a few of the quotes Paul should feel ashamed for uttering to millions through Thompson:

None of that is any of our business, and as the last vestiges of his private life are made public, his life grows even more distant from where he’s most comfortable.  Now, we know almost everything, and why?  Because the attention of our society is drawn to celebrities who can’t deal with fame – or just don’t want to.

Manziel needs a refuge, and the attention whore in his dad threw it in the crapper when he open up the family’s truth locker.  Of all the regrets he might have when this story plays out, Paul will regret spilling the family beans.

Feeding the hunger for inside dirt only creates more hunger.  The beast of public curiosity is never satisfied until there is a climax.

The media is never a friend.  Friends are friends.  Family is family.  The media is the media.  The job of the media is to feed the public information and perspective it craves.

With professionals, it’s entirely understandable for the media to prey upon those in the spotlight.  The adults who make giant bank should be savvy enough to know what to share and what to hold close to the chest, and parents are almost always aware at the point what layers to expose and which family album to keep closed.

While Johnny toiled at the Manning Passing Academy, Paul should have pulled Archie aside to find out how he dealt with people prying into the lives of Peyton and Eli.  Instead, he let a wolf into the henhouse, and even if Thompson was an accurate and fair wolf, he was still a wolf eager to share with the world family secrets that should have remained secrets.

Manziel’s nickname, Johnny Football, is more and more appropriate because the football field is the only place where the poor kid has any control.

Because of Paul Manziel and Thompson, we now know more about Johnny than most of us know about our next door neighbor.  That’s not only wrong – it’s creepy.

This is a sad time for journalism, ESPN, and most of all Johnny Manziel.