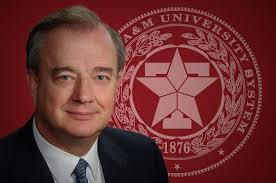 John Sharp did something few in his position ever do – he showed leadership and backed a student’s play in the face of blathering scores of well-dressed lemmings.

John Sharp is the chancellor of Texas A&M University, and he is now my favorite bureaucrat of all time.

Not Sharp.  Earlier today, he defended Aggie quarterback Johnny Manziel’s right to monetize his fame, and even went so far as to cite the Sherman Anti-Trust Act and said what seems to be obvious to almost everyone but the NCAA, “Sooner or later some court is going to say that ain’t right.”

Everyone else on the planet can accept a sack of cash for sitting at a table and signing his or her name to a bunch of photos or balls, but not collegiate athletes.  Oh no, that would cause problems like the players making a buck that the school could have.

So seldom does an administrator defend a kid who runs afoul of the arcane and obstructive NCAA bylaws that this is one of the few stories surrounding Manziel that has actually given reason for hope that logic might prevail without a trip to the U.S Supreme Court.

Manziel hardly needs the money, but allowing human beings the opportunity to monetize their own likeness is profoundly righteous, and the NCAA’s defense of a rule restricting it makes them look completely out of step with reason.

Sharp also said, “He is a good kid. He is an honest kid, he has his heart in the right place.  My mother wishes I was as nice a kid as Johnny when I was a sophomore in college,”

I doubt that Manziel saw himself as the pivot point in a debate over the limits to which amateurism can be extended, when (if) he took cash to sign 4,400 items, according to ESPN’s Outside the Lines, but that’s what he has become.

He’s made the leap from troubled 20 year-old college junior (sophomore in eligibility), who suffered the ignominy of having his private life made painfully public by the irresponsible decision of a father who seemed not to know any better to a pied piped of civil disobedience in a dispute he likely understands only viscerally if at all.

That’s okay.  When you can earn some cash while taking the morally correct road, all the better – even when you are unaware of the morality, there should be no point deduction.

College athletics and the way the NCAA and its member institution exploits student-athletes is about to face a radical change.  A kid who likes his beer and Crown and Sprites (two facts I have no business knowing) is leading a tide of change that schools are combating by requiring kids to not sign anything but school endorsed items.

It’s only a matter of time, and hopefully not much time, before other beloved athletes join Manziel in refusing to honor an unjust rule.

Maybe there will be additional chancellors, presidents, and members of boards of trustees join Sharp’s validation of the rights of the kids whose characters they are trusted to shape.