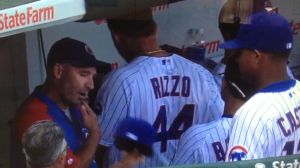 Not sure who should be blamed for the continued defensive idiocy of Cubs shortstop Starlin Castro, but it’s not manager Dale Sveum.

In today’s game against the St. Louis Cardinals, the Cardinals loaded the bases with one in the top of the fifth in a 1-0 game.  Matt Carpenter hit a pop up to shallow left.  Left fielder Junior Lake had the play in front of him, but Castro called him off, and made the catch.  The third base umpire made the infield fly rule call shortly before the ball fell into Castro’s mitt.

Jon Jay, the runner on third, did what has won the Redbirds so many games over the years.  He never allowed the expected result determine his action.  Jay tagged up, took a couple of steps toward home, and broke as Castro took a couple of steps without looking toward the infield.  He slid home ahead of the tag, and the Cardinals led 2-0.  When the Cardinals made the third out of the half inning, Sveum told Castro to get dressed.

As a 21-year-old in 2011, Castro totaled 207 hits, and appeared to be ticketed for greatness.  That his mind wandered more than occasionally in the field was at least partly attributed by many to his youth, but those lapses have never stopped – or even slowed.

ESPN’s Bobby Valentine pointed out Castro pays more attention to the crowd and sky to live pitches, and there were some who thought that negative attention might help.  That was two years ago, and the silliness continues.

It’s one thing for a little leaguer to forget to get in an athletic defensive stance before each pitch, but you would think a major league shortstop to whom a team has committed a minimum of $54 million would be able to stay attentive throughout a ballgame.

Castro has led shortstops in errors the last three seasons after finishing his rookie campaign in second place after being called up on May 7.

You can blame Jim Hendry for bringing Castro up before he learned the game properly, Hendry for putting together a farm system that did a poor job of preparing youngsters mentally for the rigors of a major league season, or current team president Theo Epstein for being a little too clever for the room in signing a cork-noodled shortstop to a massive extension years before it was necessary.

Maybe you blame both for all three reasons, but the person most responsible for Castro’s misbehavior is Castro, and he has shown no sign at all of wising up.

Conversely, the Cardinals seem to find a way to steal a few runs every week, and while they are virtually bereft of meaningful power, they lead the National League in runs scored.  That’s called the Cardinal way, and the difference between the Cardinal Way and the Cub Way accounts for the 16 games that separated the two teams going into the game today.

Sveum practiced some tough love today, and whether Castro responds positively is up to him.  With no evidence to suggest learning is possible for Castro, the only logical conclusion is that the Cubs will be hamstrung by yet another ill-conceived longterm deal for a player who is likely to do more to keep them from winning than helping them.

When players are called up to the Cardinals, they are ready to contribute on day one.  That reflects the way general manager John Mozeliak drafts and signs, as well as how the minor league instructors develop young players.  Castro is in the middle of his fourth major league season, and he’s still incapable of being a consistent positive presence.

It’s not pitching, hitting, team speed, or glove dexterity that separates the Cardinals and the Cubs; it’s culture, and right now Castro’s behavior defines who and what the Chicago Cubs are.