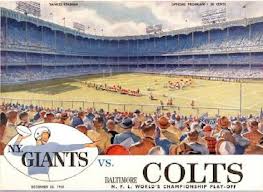 55 years after the greatest game ever played, the Colts and Giants will play a disposable preseason game.

Another August weekend, another preseason football game without a meaningful result.  But just because there is no difference between 1-1 and 0-2 as the Colts board the plane from Jersey tonight, that doesn’t mean certain aspects of the game aren’t critical to the development of the team.

The 2012 Colts are being viewed nationally as a fluke – a statistical anomaly whose 11-5 record should have been 7-9.  Being outscored by 30 throughout the course of an entire season while winning six more games than you lose is seen as a sin against math.

Fortunately for the Colts, football is played by men and not on a spreadsheet.  Repeating an 11-5 record is not going to be easy with a team featuring nearly as many newcomers as last year’s model.

There are 10 points of interest that I’ll keep an eye on tonight as the Colts move a step closer to the September 8th opener against the Oakland Raiders:

10 – Darrius Heyward-Bey needs to make a couple of catches.  Drops have been an issue throughout DHB’s career, and his camp was filled with dropped passes.  He says the right things about his hands, but when it comes time to control the ball, his hands need to do the talking.  If he can stretch the top of the defense, that will open up all kinds of opportunities for fun from the rest of the skill position employees.

9 – Matt Hassebeck stays healthy and productive – You will notice a lot of talk about leaving MetLife Stadium healthy in this list.  There is no more important result during the preseason than health, and Hasselbeck’s health is the only thing standing between Luck suffering an injury, and the Colts falling into a 2011-esque abyss.  The only answer Chandler Harnish’s presence on the Colts roster needs to provide is to a trivia question.  Nothing against Harnish, but Hasselbeck can still move an offense.

8 – The Colts must mount a legitimate pass rush.  Last week’s pass rush yield one second half sack of Bills backup QB Jeff Tuel, who otherwise was 19-for-23, 212 yards, 2 TDs, 0 picks, and a quarterback rating of 134.1.  Nice day for a rookie out of Washington State no one has ever heard of.  Robert Mathis, Erik Walden, and Bjoern Werner need to make the pocket an uncomfortable place for Eli Manning and friends.

7 – Linebackers need to hit like they mean it.  The first two runs last weekend by C.J. Spiller made the Colts linebackers look week.  Granted, they were playing without starters Pat Angerer and Jerrell Freeman, but the way they were gashed didn’t make anyone feel good about their ability to stop the run.  Watching the Chicago Bears on Thursday night, the wallops laid upon the Chargers reminded us that the preseason doesn’t need to be at half-speed.  That was their second game, so maybe tonight the Colts will crack pads with ferocity.

6 – The BC bookend tackles need to play a clean game.  Anthony Castonzo and Gosder Cherilus need to keep the Giants edge rushers away from Luck and Hasselbeck.  It’s been difficult to get an accurate read on either tackle in camp as the defense doesn’t get to hit the red jersey clad QBs.  The Giants will pull no punches, but Damontre Moore was a beast last week.  Indianapolis Cathedral grad Mathias Kiwanuka was a teammates of Colts right tackle Gosder Cherilus at Boston College, so maybe they’ll renew acquaintances.  Jason Pierre-Paul won’t play as he recovers from back surgery, so that will be one less worry for Cherilus and Castonzo.

5 – More productivity from the running game.  Ahmad Bradshaw isn’t going to play tonight, so it will be hard to project this game into a regular season performance, but last week’s average of 4.5 yards per rush was an okay number.  The guy to whom my eyes kept migrating during camp was Kerwynn Williams, who looks great both running and catching the ball out of the backfield.  He was drafted in the seventh round, and looks very similar to a seventh rounder from the previous year – Daryl Richardson of the St. Louis Rams.

There would appear to be four running backs ahead of Williams (Bradshaw, Vick Ballard, Donald Brown, and Delone Carter), but he sure made plays against the Colts defense the last three weeks.  Last week against the Bills, Williams had 21 yards on four carries.  More importantly, the runs were for five, five, five, and six yards.  That kind of consistency moves the sticks, and three of the carries were in the second quarter before roster fillers took the field.

4 – “Sure thing” wide receivers maintain health – Andrew Luck isn’t the only Colts who needs to stay healthy.  Reggie Wayne and T.Y. Hilton need to be ready to go for 16 games for Luck to be productive.  It seems odd to refer to a third round pick in his second year as a sure thing, but Hilton has showed he’s ready to take another step forward in 2013.  His hand are incredible and his top-end speed is blazing.  The Colts may have as explosive a group of skill players in the league, and with a leader like Wayne, they could have room for additional improvement.

3 – If Coby Fleener plays, he needs to hold on to the ball.  He’s looked good in camp, but against the Bills, the fumble and drop were very noticeable lapses.  If Fleener can hold on to the ball and Dwayne Allen returns to the form of his rookie year, the Colts will have a tight end tandem that rivals what the Patriots had before injuries and a murder charge made Michael Hoomanawanui a go-to target for Tom Brady.  Fleener was limited this week in practice due to a concussion suffered against the Bills, so how many reps he’ll get – if any – is to be seen.

2 – Did Curtis Painter get a haircut? – Painter was 5-of-11 for 55 yards as he battles David Carr and Ryan Nassib for roster spots at QB.  Painer looks like he’s the longshot, but Colts fans will remember how capable Painter appeared during preseason games after Peyton Manning finished his work.  I have a theory that people who spend a lot of time worrying about their hair spend less time worrying about what’s important.  A haircut for Painter might indicate that he’s worrying about the important things in life – like perpetuating his employment.  I root for Painter because he and I were both celebrity waiters at a Gary Brackett event a couple of years ago and he was a great guy.  (My status as a celebrity for this event is one of the great mysteries of our time.  I tried to make up for my lack of fame by busting my ass for the table to which I was assigned.  I was every bit the waiter as I was a celebrity.)

1 – An upright and ambulatory Andrew Luck.  There is nothing more essential to the success of the Colts than the health of its quarterback.  The Giants piled up five sacks last week against the Steelers, but four were against John Parker Wilson during the last 10 minutes of the game when he was being protected by five future former NFL training camp invitees.

Line – Game is a pick ’em after opening at Giants -4.  Betting NFL preseason is ridiculous, and all who wager on this game deserve what they get.