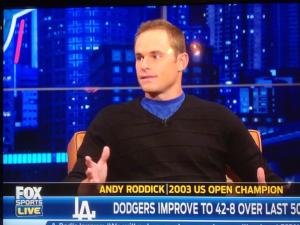 Fox Sports 1 wants you to care about what Andy Roddick thinks about the LA Dodgers.

“It’s the content, dummy!”  That’s what I would yell at the programmers who have launched Fox Sports 1 as a  supposed competitor for the massive national sports audience share owned by ESPN.

So far, I would be surprised if they can catch NBC Sports Network.

Fox Sports 1 is a train wreck, and that isn’t going to change because the execution of the product shows perfectly the wrongheaded priorities of those in charge.

The information is wrong, and the analysts are ridiculously miscast.  As I watched tennis great Andy Roddick and former point guard Gary Payton discussing the incredible run of the Los Angeles Dodgers, I thought of the 1992 vice presidential debate between Al Gore, Dan Quayle, and James Stockdale.

Stockdale earned a Medal of Honor and four Silver Stars during one of the finest military careers in American history, but was so woefully miscast as a vice presidential candidate that during the debate, his opening statement began with two appropriate questions, “Who am I? Why am I here?”

Roddick might have wondered who in the audience gave a damn about his thoughts on baseball, and the answer might have sent him from the set in tears.  ESPN rolls with baseball analysis from John Kruk, Tim Kurkjian, Curt Schilling, Doug Glanville, Bob Holtzman, Jon Schiambi, Rick Sutcliffe, and others.  Nowhere on the list is Jimmy Conners, Lee Trevino, or Wayne Gretzky.

That’s because what ESPN knew from the beginning is that unique content is king, and the ability to offer it will always attract viewers.  Content creates stars, not the other way around.

You would have though Fox might have figured that out with “American Idol.”  The original featured four mostly unknowns in Simon Cowell, Randy Jackson, Paula Abdul, and Ryan Seacrest.  That show turned all four into stars.  Since the show has been recast with stars like Jennifer Lopez, Keith Urban, and Steven Tyler, the content has suffered, and so has audience satisfaction as reflected by ratings.

The execution of what Fox should be doing well has been lacking as well.  In one five minute span on Saturday night, at least three were obviously wrong.  I would recommend “Find the Graphic Goof” as a drinking game, but no one could stay conscious through the first 45 minutes of drinking every time an inaccurate graphic was revealed.

Five minutes of that with Roddick slicing and dicing the Dodgers was enough to put me off this product forever.  With apologies to The Who, “Meet the new Fox, same as the old Fox.”

The old Fox Sports gathered as many big sports names and hot chicks as they could squeeze under one roof, and turned them loose.  It was an unholy mess.  Ditto this, but with the bizarre addition of Regis Philbin.  I wonder what Regis would have told people when he was the second banana on the Joey Bishop Show almost 50 years ago if someone told him that in 2013 he would be the host of a sports show on TV.

Of all the crazy hires on Fox Sports 1, the sanest might actually be Regis.  More than anything else, Regis is a broadcaster, and Fox Sports 1 needs broadcasters to drive the train and help the dozens of disparate parts to  be the best version of themselves.  For many years, Regis helping Kathie Lee Gifford’s personality approach likability.  Anyone who can do that has great on-camera value.

The only network to launch during the past decade who did it right is the MLB Network.  They understood from jump street that content creates stars, and so they hired people who can present unique content in an entertaining way.

The NFL Network can be hard to watch.  There are members of that team that seem to exist only to cackle at the antics of others, and that inside communication can be annoying.

Let it never be said that I am only willing to reveal easily defined problems.  Here is a list of must-dos for any network launch:

The painful (for Fox Sports 1) truth is that there is no market for another all-sports network.  There is virtually no meaningful play-by-play up for grabs, and ESPN already has ESPN2, ESPN News, and ESPNU.  Each major professional league has its own network, and do the major collegiate conferences.

Everyone wants to find a way to mimic ESPN’s ability to monetize cable and satellite subscribers.  Two-thirds of ESPN’s gross revenue comes from subscription charges, and who wouldn’t want to wake up on the morning of the first day of your fiscal year nearly 70% of the way home?

Catching ESPN is likely impossible, and Fox knows this better than anyone, because ESPN pushes itself hard to fortify itself against all potential attacks as part of its DNA.