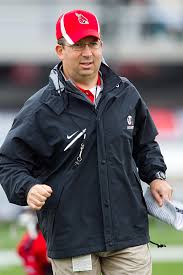 Pete Lembo has won everywhere he’s coached, and now he might be ready for something special in 2013 at Ball State.

College football fans in Indiana tend to focus on Notre Dame, Purdue, and Indiana.  Ball State is a bit like a forgotten neighbor kid who is never invited to play with the older kids on the block when it comes to conversations about football among fans here.

The Cardinals are not likely to catch the Fighting Irish in terms of quality of play, and sure as hell will never achieve their popularity, but the Hoosiers and Boilers might be had in 2013.

The Ball State Cardinals under coach Pete Lembo beat Indiana 2011 and 2012.  This year, the Hoosiers aren’t on the Cardinals’ schedule, which is a positive move for the Cream and Crimson.  You can’t lose to teams you don’t play.  A Big Ten team should never lose to a MAC team, and sure as hell never twice in a row, especially when the campuses are roughly equidistant from Indianapolis the hotbed of recruiting in the state.

Brady Hoke got the program rolling back in 2008 with a 12-0 regular season mark before leaving for San Diego State and then Michigan, and now Lembo is doing the same thing with a senior quarterback who is likely to own all the records set five years ago by Nate Davis.

Keith Wenning is almost certainly the best college quarterback in Indiana, and Ball State will go as far as Wenning propels them.

Coming off a 9-4 campaign and trip to the Beff O’Brady Bowl, Ball State is looking for big things – as expressed in the interview below with Fox 59’s Jeremiah Johnson and me.