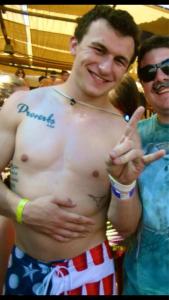 The sound you just heard was anything within arm’s reach being thrown against the walls of every building in Columbus, Ohio.

Johnny Manziel will sit for the first half of the Texas A&M vs. Rice as the punishment for whatever the NCAA’s findings are in their investigation into whether Manziel was compensated for signing autographs.

Lying sucks, but lying in the face of an organization with rules that aren’t rooted in reality or morality achieves the right result.  “The ends justify the means” is the credo of the irretrievably corrupt 99-out-of-100 times, but every once in awhile, it’s a moral imperative.  If Manziel lied, good for him.

The NCAA has looked ridiculous throughout this drama, and the result has reduced them to the paper lion they have always been.  Many powerful people have called for the NCAA to enforce its rules, but the problem with enforcing rules is that when the rules aren’t just, the system fails.  And it has failed here.

Somehow, the NCAA has turned a self-centered beer/Crown Royal swilling boob of a quarterback into a folk hero for making a cash grab, if reports are true, in south Florida prior to the BCS National Championship game for signing a bunch of swag.  Manziel is Willie Nelson in a helmet, and Mark Emmert is the IRS.

In Columbus, football players traded autographs for tattoos.  They lost half a season.  Coach Jim Tressel lost his job after looking the other way, and ultimately school president Gordon Gee was removed from office.  The reasons were many, but the ball started rolling during his flippant press conference performance when he famously said, “I’ll be lucky if (Tressel) doesn’t fire me.”

In College Station, Texas, the appearance of taking a lot of cash for a lot of autographs nets Manziel sitting for one half of a meaningless game.

The NCAA is a trainwreck headed toward either a massive reorganization or its doom.  Instead of being feared or respected, it’s morphed into a laughingstock.

It’s a shame because college athletics need oversight.  The appearance of competitive balance needs to be preserved or all is lost.  It’s hard to know where the blame for this mess lies – with Texas A&M, the NCAA, or society as a whole.  The vibe from the NCAA offices is one of a defeated organization that is just hanging on until the O’Bannon suit is either settled or goes to trial.  After that…

As Hunter Thompson wrote, “The hog is in the tunnel,” and the administrators in Indianapolis are poorly pretending otherwise.

Manziel gets to play, which is right.  Ohio State still suffers from the madness of Tattoogate’s farcical fallout, which is wrong.  And the NCAA is fumbling for its teeth like a 90-year-old with glaucoma, which is sad.