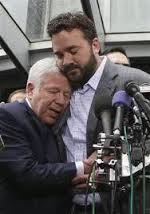 At the end of the NFL Lockout in 2011, former Indianapolis Colts center Jeff Saturday gave New England Patriots owner a hug and thanked him for his role in ending the work stoppage.  It became the money shot for the biggest sports story of the year, and Jeff Saturday became a star.

Two years later, the recently retired Saturday is a regular on NFL themed ESPN programming, and he is excelling very early in his second career.  He regularly provides the most coherent and well-reasoned thoughts on the NFL for the sports leader.  Others blather about what they have been told by their sources.  Saturday shares what he believes.

Saturday personifies the most important trait needed to succeed in media – authenticity.  He’s had it for a long time.

In the summer of 2000, WIBC radio in Indianapolis was looking for a Colts player to join the morning and afternoon shows for that season.  We had a run of uneven luck with players – Joe Staysniak was good for us, Tony Siragusa was a hilarious FCC violation waiting to happen, Trev Alberts was not a good fit, and Ken Dilger was quite solid.

We met with several Colts, and all seemed to be trying to sell themselves.  None would have been terrible, but they didn’t have that thing that would compel an audience to listen.  Then we met with Saturday.

He sat down in program director Jon Quick’s office and behaved.  There was nothing contrived about him.  The group just kind of hung out.  Saturday had a good laugh, was an excellent listener, and turned a meeting into a social event.

No one was certain that Saturday would start at center for the Colts in 2000.  He had started only two games in 1999, but he was such a no-brainer as a human being that 30 seconds after the meeting ended the decision was made to hire him.

That made for one of the easiest and best decisions made at WIBC during my time there.  Saturday told the truth in a way that didn’t piss anyone off.  A nice guy to his core, Saturday is the type of person you feel you know well and like five minutes after meeting him.

For people who want a great recipe for finding talent, that’s it.  There are people you just know have that thing, and Saturday is full of it.  It’s not charisma as much as absolute believability.

Of course, Jeff Saturday is a success on ESPN.  He’s unafraid to show who is he is, and that is a likable guy who tells the truth.

Yesterday, he showed comfort during an interview with his old quarterback Peyton Manning.  Saturday asked Manning about the Broncos decision to run the read-option this year.  It showed Manning at his non-corprorate and funny best – just what a good interviewer should.  It was great TV, and Saturday made it look easy.

Look for Jeff to have a long and successful career in media for as long as he wants one because “real” works.