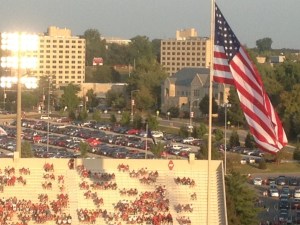 The view of my old room at Briscoe is a hell of a lot better than my view of the stadium was from inside that room.

Memorial Stadium looks a little bit different.  The north end zone has been closed, and I’m sitting on the other side of the bleachers now, all the way up in the press box I used to find so mysterious.  But everything is so familiar it feels like yesterday that I was part of this madness as a student.

And it was madness.

What was on the football field was quite ordinary.  I came to IU the year following the joy of the Holiday Bowl win and finished the year before Bill Mallory got the ship righted.  What happened in between did a lot to keep students like me from entertaining the notion of actually watching the games.

Lee Corso’s endless pacing was monotonous and of no use.  The one year Sam Wyche era was grueling, and the year following that saw IU put up a total of zero wins.  My six autumns (if you could spend six years as a student at IU, wouldn’t you?) at Indiana had a little bit of everything but winning football.  There were good grades and bad, great decisions and stone cold idiotic ones.  There was a basketball national championship, and a trip to the NIT.  I met the woman who remains my wife, and there were a couple of others who didn’t pass muster on any level that preceded her.

From my seat tonight at the home opener, I can see the window for my dorm room at Briscoe Quad.  I remember laying there between the moments of laughter and debauchery wondering just what the hell I was doing in this huge place with all these strange people.  Little by little, I figured out that I was becoming an adult – not a fully functional adult, but enough of an adult that I could fake it until I fully made the leap around my 30th birthday.

While others might envy the students and their carefree lives, I sure as hell don’t.  College was very difficult for me.  I had no idea what I wanted to do or what classes to take.  Having so many damn options was paralytic for me.

What I left IU with was a wife, great friends, and a deathly fear of sleeping through a test at Ballantine Hall.

I look at that window of Briscoe 930-B and think about the knucklehead who used to stare out the other side wondering when he might figure out what the hell he was supposed to do with tomorrow – and all the other tomorrows that were ahead, and I wouldn’t swap places with him now for Mark Cuban’s money.

That he wound up sitting here all those years later is the type of upset Kevin Wilson and the Hoosiers will try to pull off on November 23rd against Ohio State.  Maybe that’s a little dramatic, but the road from there to here was a hell of a lot farther than the quarter mile west on 17th Street between there and here.

Wait a minute.  The first thing I did when I got to the press box was gorge myself on the free spread for media folks.  The second thing was laugh at inappropriate comments made by some friends I ran into.  The third thing if I hadn’t been up since 4a this morning would be to head over to Nick’s for some postgame laughs and a jar of whatever poured easiest.  And the final thing is get a Dagwood’s Supreme delivered to wherever I was.

Christ, not a damn thing has changed.