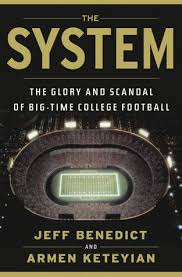 The NCAA dangles on the brink of irrelevance after it’s 1/2 game suspension of Texas A&M quarterback Johnny Manziel, and now with the release of “The System”, a bevy of additional questions will be asked as to why the organization exists at all as an oversight authority in the world of big time college football.

People go on the record in a way that has never before been seen, heard, or read.  There is the story told by the father of Texas A&M running back Ricky Seals-Jones about his being offered $600,000 by several other schools to commit to them, recruiting hostesses flirting (and more) with prospective student-athletes, tutors completing homework (and much more) for athletes, and the transcripts of the Tattoogate interviews by the NCAA with then Ohio State football coach Jim Tressel and AD Gene Smith.

I can’t wait to read it when it’s released September 17th, but I’ll bet the NCAA is not looking forward to its publication.  The two reporters who wrote it are Armen Keteyian and Jeff Benedict, and they are beyond reproach as investigative journalists.  Claiming they got it wrong will not be an acceptable response.

This book will prompt questions like, how in the hell can reporters get subjects to happily talk on the record about the corruption we all know exists in college football while the NCAA can’t get information out of anyone.

With every allegation, assertion, and first person story of misconduct, the canard that college athletics and amateurism have anything to do with one another is further exposed.  This book might cause the scales of justice that the NCAA purports to hold to collapse under its own uselessness.

The time is coming for the NCAA to either completely replace its rulebook to allow the kind of violations that are a regular part of college football and men’s basketball (I might be naive in thinking it stops there), or cease to operate as an organization with oversight responsibilities.

Not to give the NCAA an easy out, but the corruption that is detailed in “The System” has been ongoing since the beginning of college athletics.  There are movies like the 1938 non-classic “Hold That Co-ed” with John Barrymore and the Marx Brothers “Horse Feathers” (1932) that deal with fixing football games by paying players.

The NCAA is not built to keep universities from defying its rules, and I’m skeptical that given subpoena power and a brute squad of hundreds of eager young investigators that they could change the landscape.  “Cleaning up” college sports would require NCAA President Mark Emmert to put the brakes on corruption that started long before the first rules on recruiting restrictions were enacted in 1939.  Fighting that kind of inertia is not only impossible, but unwise.

College football works, and messing with it is bad practice and bad business.  Logic is calling the NCAA, but no one is answering.  It wants to say that regulating college football as a purely amateur endeavor is a lost cause – as it has always been.

“The System” will peel layers from the facade of what many believe happens regularly in college football, and the pressure on the NCAA to bludgeon member schools who are indifferent to its rules will increase.  The time is coming for reality to be accepted by fans and administrators that where there is value, people will be compensated, and where good grades are needed to ensure eligibility, schools will provide the means for student-athletes to obtain them.