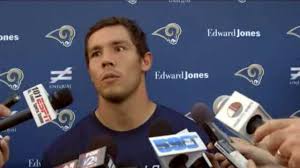 Rams quarterback has some explaining to do.

Not sure how many seemingly good drafts it takes to build a roster capable of winning, but evidently the last two haven’t been enough.  Ram General Manager Les Snead continues to sign free agents who have played well in the past, and have even played well for the Rams, but aren’t close to getting the job done now.

Running the ball 19 times for 18 yards last night against the San Francisco 49ers was as putrid an offensive display as I’ve ever seen.  Minus a seven-yard gain long after the game had already been decided, the longest gain running the ball was three yards, and that spot might have been a little generous.

Quarterback Sam Bradford wasn’t part of the solution either, completing 19-41 passes for 202 yards.  He showed the lack of feel inside the pocket that has become his defining feature.  Averaging 4.9 yards per pass is an anemic number that defies the respect shown to him by the Rams coaching staff and front office.

This wasn’t the Steel Curtain defense the Rams were playing against either.  With all-world linebackers Alden Smith and Patrick Willis playing last Sunday, the previously soft Indianapolis Colts smashed the 49ers in the mouth and dominated in Candlestick Park.  With Smith in rehab and Willis shelved with a groin injury, the Rams looked baffled and soft the entire night.

It was hard to tell watching the game live whether the Rams offensive line didn’t know who to block or simply can’t block. Looking at the tape, the worst answer is revealed.  It’s both.  The backs serve as little more than a speed bump for blitzes, and tight ends Jared Cook and Lance Kendricks appeared to feel that blocking is not what they get paid to do.

This was a must win for both teams, but only one showed up.

If it wasn’t for Jeff Fisher’s pedigree as a coach, it would be easy to look at the last two games and assume that he has lost his players – that they just aren’t playing for him.  It is also easy to assume that the coordinators have no idea what they are doing and are being outwitted by their counterparts.  Now, that might be true.  It’s hard to say without being in the room, but the Rams have appeared ill-equipped against the Dallas Cowboys and 49ers to stop the run or run the ball.

Blame lies somewhere, and the fatal combination of being unable to move or stop the ball needs to be corrected immediately, or the Rams are looking at yet another disastrous season for a fanbase that won’t tolerate much more awful football.

St. Louis is a soft NFL town to begin with, but this decade of mediocrity, and I am generous in my choice of words to describe the last 10 seasons, the Rams might just permanently turn off the town.

A couple of quick questions that need to be answered –

The season isn’t over for the Rams, but imagining a scenario where the group on the field last night can compete against an NFL team not the Jacksonville Jaguars requires a double dose of peyote.

Running back Frank Gore ran 30 times for 60 yards in his first two games, and minus one drive against the Colts in his third was mostly inert.  Against the Rams, Gore gashed for 153 on 20 carries.

How long does St. Louis need to wait for a team that will show up and compete?  Either the Rams don’t have the talent, the heart, or the brains to win.  Maybe losing is so ingrained in the DNA of the franchise that new rosters, coaches, and front office personnel can’t steer it away from the icebergs that continually crop up in its path.

It’s still September, and three quarters of the season remain, but it’s hard to imagine a turnaround so radical that the 2013 season can be saved.  This five-day span with two bad beats might be the worst any team has played in the Super Bowl era, but Rams fans of the last ten years would be better judges than I.  They lived through the worst five-year stretch in NFL history (15-65 from 2007-2011).

I thought Fisher and Snead were the guys to get this job done.  Maybe they are.  If the Redskins keep losing, the Rams might have yet another two early picks in another draft.