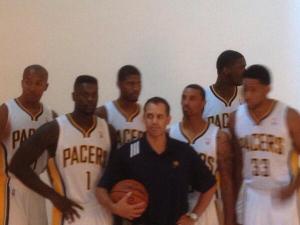 Pacers move into position for a team picture. That six players joined coach Frank Vogel revealed nothing about who Vogel plans to start.

Before you think I’m off my meds and have developed delusions of the Indiana Pacers winning the NBA Title, read the headline carefully and notice “can” not “will” as the verb.  It would be a stretch to pick the Pacers to win the championship without seeing this group play together for a couple of months.

The thought of the Pacers being good enough to win its first world championship isn’t evidence of a mental defect – maybe for the first time in franchise history – and there are legitimate reasons to believe it possible.

Today was media day for the Pacers, and with every interview, I loved the construct and vibe of this team more.  Anyone who has been around professional sports teams for any length of time can smell a loser a mile away.  What the Pacers smell like is anything but a loser.

It takes talent to win in the NBA, and the Pacers front office went out and got some this offseason to help fortify the second unit, so that during the 15-18 minutes each game the starters sit, leads don’t become deficits.

The Pacers dealt for Luis Scola, signed Chris Copeland and C.J.Watson, and hope for a full season of health for Danny Granger.  Those four additions represent upgrades in talent at each position, but more importantly all of those players have “been through the wars,” as power forward David West put it early this afternoon.

Hear are 10 reasons the Pacers can win its first NBA title nine months from now:

David West is a locker room sheriff teammates have to take seriously.  He is thoughtful and honest, as most tough men are.  If I was a screwball and West told me quietly on the team bus, “Listen, I have three or four years left to play this game and try to win a ring.  Your behavior is screwing with my ability to achieve that dream, so that behavior will stop.  Thanks for the talk,” I would immediately modify the behavior he found offensive.

Paul George is the best wing defender in the game.  George led the NBA in defensive wins created, and the gap to second place finisher Marc Gasol was a substantial 0.9.  He’s long, tough, and only 23.  Fans like to watch the ball.  Do yourself a favor and lock in on George as he defends away from the ball.  There is a long way between where George is today, and where his potential can take him.  A coach with USA Basketball texted West saying that George is a top five talent, and has the potential to be a league MVP.  Sports Illustrated ranked George 25th among all NBA players in this week’s edition, which shows why no one reads SI anymore.

Roy Hibbert is figuring out how to improve a little every year.  Hibbert added 10-12 pounds this offseason, and is now stronger than last year during the playoffs when he was pretty damn good.  Hibbert has built himself into a traditional NBA center who can defend and run the floor.  Who thought that was possible after watching him play at Georgetown?

George Hill is a funny man.  An almost uncomfortable amount of time during Hill’s time at the microphone today was spent discussing his ability to “lose ten pounds,” and he didn’t mean through diet.  The word “poop” was used a lot.  The NBA season is long and arduous, and having someone funny enough to break the monotony is a valuable tool in keep psyches fresh.  Hill appears to be that kind of guy.

Larry Bird says they are capable of winning a championship.  If basketball fans have learned anything during Bird’s time in Indianapolis, it’s that he tells the truth.  If the Pacers had no chance to make the playoffs this year, he would convey that in an indirect way that would leave no doubt without actually saying it (no need to unnecessarily repel the ticket buying public).  During the press conferences announcing the re-signing of West and the extension for George, Bird was effusive in his praise for both, and has reiterated several times that the Pacers are “all in” for the 2013-2014 season.

There is something about Luis Scola that smells like winning.  I followed Scola around as he reported to different stations on the practice court today for photographs, and there was no nonsense to him at all.  He wasn’t gruff or unpleasant, but had the aura of a guy impatient to get to work.  It was as though he knows this year could be special, and can’t wait for the nonsense to end so he can get to work at his real job.

The way teammates spoke about first round pick Solomon Hill.  Fans didn’t have much of a clue as to who Hill was, and many experts ranked him outside the draft completely.  When asked if anything had surprised them during pick up games, Hill’s new teammates were unanimous in saying that Hill did, and that he will be able to help them win sooner rather than later.

Selflessness.  Every team preaches winning over individual success as its mission, but the Pacers seem to sell it with a little less insistence and a little more sincerity.  When Danny Granger was asked about his role with the team as a scorer, he said that offense would be the least of the pacers problems, that hey can get offense from virtually anyone on the court from either the first or second unit.  This is a guy coming into the final year of a huge contract – a guy who would like to sign at least one more big money deal before he starts living off his NBA cash.  if anyone had reason to squirm a little bit about sharing the ball like he plays for the CYO team, it’s Granger.  But he seemed earnest in only wanting to win with this group of guys.

Granger might return as healthy and strong as ever.  Speaking of Granger, how many teams in the NBA are adding a former all-star and NBA Most Improved Player Award winner to the roster this year without giving up anything in return? None.  The pacers not only went out and nailed their acquisition targets, but will add depth through the activation of a selfless player ready to contribute.

Depth will help in practices too.  There is something to be said about the improvements a team can make during practices by playing against a group that is nearly as gifted as the starters.  The Pacers starters are going to have to perform better during practice to avoid being shown up by the second unit.  There is nothing more satisfying for those who are reminded everyday of their station on a team as back-ups that beating those starters during scrimmages, and that makes everyone better.

David West answered a question about goals for the season by talking about the need to earn the right to play game sevens at Bankers Life Fieldhouse.  I wouldn’t bet against the Pacers.