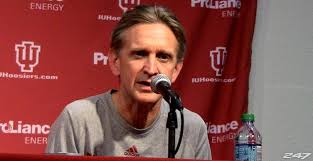 There is a pressing question for everyone associated with the 2013-2014 Indiana University basketball team, and that is “What are your expectations for this year’s team?”

It’s kind of a silly question because there isn’t a sane coach or player associated with this or any other team who will quantify it with a number of wins regardless of how many players return.  When a team loses 80% of its offense, vague responses are the expectation for an answer.

But the question has to be asked because people who follow the program have no idea what the hell this group will look like once they take the floor for real.

Indiana has one of the best group of freshman in the country, and a lot of what might happen hinges upon the development of Noah Vonleh, Troy Williams, Stanford Robinson, Luke Fischer, Devin Davis, and Collin Hartman.

The returning guys include Will Sheehey, Yogi Ferrell, and Austin Etherington, and they will be expected to both lead and produce.

IU assistant coach sat down to talk about the Hoosiers.  His answer about expectations was the most specific I got from anyone at Assembly Hall.  It discussed a result, rather than solely the desire to see improvement through diligence.

I also brought up an episode that a group of media knuckleheads went threw a couple of years ago where McClain degraded me for my lack of length (which is fine for banging finger tips against a keyboard and golf, but not an asset for basketball).

Hoosier Hysteria will be held tonight in Assembly Hall.  Gates open at 5p, and the event itself will begin at 7:30p.  Afterward, the team will sign autographs for an hour in the concourse.  Bring one item for players to sign, and bring a nonperishable (canned) food item for the Hoosier Hills food Bank.

Interestingly, I have hired three of the four hosts for the night’s activities.  Eddie White, Chuck Crabb, and Jeremy Gray all proved me right in my belief they are very talented.  The fourth host, Chuck Crabb, was a legend before I ever earned a position where I could have hired him.