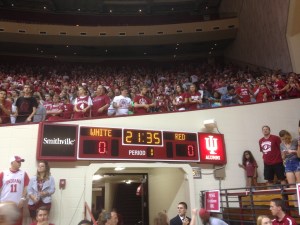 Assembly Hall is packed tonight with students who will be fully functional adults in 15 years – give or take.

This post is not about the fortunes of the Indiana Hoosiers in 2013-2014.  No, this is about the thousands of students who have packed into Assembly Hall to watch the festivities.

Being a college student sucks.  For all the fun, energy, and free time, being in college presupposes that you are not nearly ready to navigate the challenges presented by a world run by people with the kind of responsibilities that would make the average Sigma Chi wither.

I’m sitting in Assembly Hall on the campus of Indiana University looking into the sea of young fresh faces at tonight’s Hoosier Hysteria opening night for the 2013-2014 Indiana Basketball season, and I can’t help but think about how strangely bereft of wisdom they are.

It sucks being a student – whether it’s in high school, college, or even an entry level employee.  The assumption is that everyone knows more, and that’s a little presumptuous.  Who are these teachers, professors, and bosses to believe they know more than you?

How the hell much is there to know after all?

The Dan Dakich Show is primarily about sports, but it also deals with life in a way that can grind the gears of the young because Dan tells all kinds of truths – wonderful, awful, pleasant, and those that fly in the face of what many believe.  Today, Dan had a chat about learning, and how the teachers who are demanding get the most out of their students.

Current college students didn’t enjoy hearing that perspective, and let Dan know about it via Twitter, text, and any other social media tool in their arsenal.  Students, and I was exactly the same way when I was stumbling through Ballentine Hall trying to find H106 in Room 013 with Professor Juergens, like to believe because they look like adults that they actually are adults.  College is a game, and grades are the reward for winning.  Accommodating profs meant easy Bs,and the pricks would force me to work for Cs were to be avoided.  Learning was not a big part of my agenda, nor is it for many.

And I’m afraid the majority of kids in Assembly Hall tonight are here to prolong time prior to the headaches and thrills of providing for a family.  In real life failure isn’t represented by an F.  It comes in the form of a foreclosure.

The stakes of adulthood bring wisdom, and that’s what Dan was talking about today.  The unkind coddling of students does nothing to prepare them for what lies ahead.  Everyone doesn’t get a trophy in real life.  They get raises, severance, pain, joy, accomplishment, and failure.  And the safety net is very thin.

The teachers who demand your best work are those you remember forever because through their yearning to pull you toward your potential, you grow into someone ready for challenges – real challenges, not writing a 5,000 word opus on the reasons Roosevelt screwed the pooch at Yalta in two hours after polishing off half a fifth of Wild Turkey the night before.

Teachers who are friends are useless as it’s not the information that is truly important, but the ability to focus, learn, and produce.

One of the best teachers I ever had was a guy named John Hastings.  He taught eighth grade physics and chemistry simultaneously, and looked like a bald Woody Hayes.  He presented the information, and demanded that we learn it.  I worked my ass off for Mr. Hastings to get a B-.  One day, long after school ended, I waited for my Mom to pick me up.  Mr. Hastings came to the door and waited for what I assume was his ride.  I tried to chat him up a little bit, and told him what a good teacher he was.  He looked at me with a combination of confusion and indifference, squinted, and left without a word.

There would be no friendship, or even a moment when he let his guard down.  No, the reward for knowing Mr. Hastings would be in pushing myself harder than I  otherwise would have, and in every other science class I took all the way through college where I walked in the door already knowing everything that would be presented.

School is not about grammar, algebra, and Erlenmeyer flasks.  It’s about discipline, and without that, you have no chance to be a functional adult.  Colleges are not doing a consistently good jobs of instilling discipline, and one of the reasons is that a rising percentage of teachers would rather be friends than demand attentive and disciplined learning.

That’s the lesson Dan was trying to teach today.

Developing wisdom is significantly more difficult and takes a much longer time than learning college level calculus.  It takes a certain amount of success, failure, responsibility, and pondering.  It requires making tough decisions, like whether to fire a friend for the longterm good of the company.  It takes deciding whether following a directive that runs counter to your morality is made palatable by the smile on your children’s faces when they learn the family can now afford a bigger house.  It requires making the call of whether or not to own up to a mistake or throw a co-worker under the bus because you have a house payment to make.

You don’t learn who you are in college.  That comes much later, and that’s what Dan was saying.  It’s not an insult, but an absolute truth.  Adulthood is not chronological; it’s behavioral, and it cannot be rushed.

College is like everything else – you get out of it what you put in.  Those who push you to invest heavily should be embraced.  Those who don’t should be shunned.  You have enough friends.  Teachers and professors who make you feel like they “get” you should send you running to drop and add.