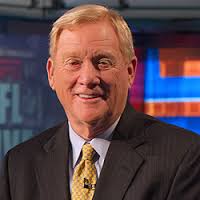 This is the happy and relaxed Bill Polian. He was nowhere to be found today during his ESPN appearances.

Note to self – if you ever fire Bill Polian, give him a chace to vent in the office, so he doesn’t puke bile all over ESPN asked about previous managers.

There is one thing that people in indianapolis learned from 1998 thru 2011 about Bill Polian – it does not take much to turn him defensive.  When God handed out the emotional callouses that keep most of us from lashing out each time someone – anyone – takes a potshot at us, or every time we infer an attack that doesn’t actually exist, Polian was waiting in the line for a second helping of ability to assess physical potential on the gridiron.

Today, ESPN got a dose of Polian’s righteous indignation toward Jim Irsay when he was asked to comment on the Colts owner’s comments about the strategy that led to Peyton Manning’s release:

ESPN: Bill, you worked really closely with Irsay for years – do you think his initial comments, you know, as he alluded to, were not meant the way they have been taken?

Polian “Well, I never had an exit interview, so I can’t tell you what he meant or didn’t mean by that.  Let me deal with some facts, okay?  I’ll give you some names – Dwight Freeney, Robert Mathis, Kelvin Hayden, Gary Brackett, David Thornton, I could go on and on.  Adam Vinatieri, Pat Angerer, Bob Sanders, Elvin, uh, Bethea, I can go on and on.  Antoine Bethea.

“By the way, there was a salary cap, and when he talks about this model that he wants to build, which I’ve said a hundred times is perfectly okay.  He’s the owner and he can do what he wants.  When he has to pay Andrew Luck as one of the top paid quarterbacks, if not the top paid quarterback in the league two years from now, he’ll be back in the same boat we were in for all the years that we had Peyton.

“So, we did our best and if that wasn’t good enough, that’s fine.  I don’t have any problem with it, but I will tell you this, and I’m sure I speak for most of my teammates and colleagues, are very proud of what we did.  Our record is there for all to see.  It’s up to this new group of Colts and this new model to meet or exceed what we did.”

I saw the exchange live, and the interesting part that brought back memories was the beginning of the live shot.  When ESPN cut to a shot of Polian before he spoke, his eyes had that look – the dead-eyed angry guy look that signaled Polian’s thin skin had been scratched.

There was no holding it in.  Polian didn’t say whether he feels that Manning had been slandered, but he damn sure felt slighted himself by Irsay’s implication that the construct of the roster during the Manning/Polian era in Indy had cost the Colts multiple championships.

Polian was a significant part of the team that made the Colts one of the best franchises in all professional sports from 1999-2010, but his self-indulgent ill-temper and strange defensive posturing (talking about emotions, not three technique) when questioned by uninformed fans and media made him difficult to deal with.

Later in the interview, Polian quoted Marv Levy, “Your actions are so loud that I can’t hear what you are saying.”  That means that there is no point in defending yourself verbally – that the results of your past are the legacy to which people pay attention.  I thought it odd for Polian to use that quote when he had just spent the previous two minutes credentialing himself, which violated the spirit of the very quote he cited.

All that said, I always enjoyed dealing with Polian.  He’s a good guy, and someone that I have always admired.  I wish that he could enjoy his success a little bit more, but for many high achievers, the same drive that causes them to strive so long and hard for success also prompts them to occasionally act like petulant children.

That was Polian today, and while the sting of being fired never really evaporates completely, it should dull over time.  Today, Polian acted as though he was told to pack his things yesterday.  Even if it continues to hurt, Polian should keep it to himself.  He will rightly be a hall of famer eventually, and behaving as he did today belies an insecurity unbecoming someone who was one of the NFL’s all-time best at what he did for three teams over a quarter century.