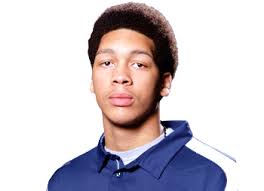 A.J. Hammons is proof that sometimes God plays tricks on people.  Every once in awhile, he matches the wrong brain and body.

Such is the case with center A.J. Hammons, who has always been physically gifted, but not a real fan of the game of basketball.  That’s the assumption I make from watching him play and talking to former teammates at Carmel High School.  And that is what this is – speculation informed by former teammates of Hammons to whom I have spoken.

None of this should be taken as first hand testimony because I have never spoken to him.  I’ve seen him play many times at Carmel and Purdue, but the insight into his behavior is gleaned from three guys whom I have asked to explain Hammons’ malaise.

“Great guy, but he doesn’t really like the game,” is what one told me, and was agreed with by the other two.  One went on to say, “I can’t imagine how good he would be if he ever learned how the game works.”

He has NBA height, NBA length, and NBA athleticism, but the brain of an artist.

Coaches talk about the mythical switch that might flip to on at some point and win a National Championship.  Most of these kids don’t have a switch – they are either wired to work and overcome adversity or they aren’t.  The same thing either exists or doesn’t in all of us.  Success is not easily won because many would kill for it.  If a person has trouble getting out of bed for it, he or she better have an insane level of talent.

Purdue basketball coach Matt Painter is as good a guy at trying to mandate a certain level of hard work, but the best way to get a team to work at a championship level is to recruit kids who are already wired to engage in that behavior.

As for Hammons, he is the guy whose play with determine the heights to which the Boilermakers can ascend, and Painter is clearly trying to get his attention through a suspension because other methods have failed.

There is noting wrong with a seven-foot tall kid not enjoying the game of basketball.  It happens quite a bit.  Others get pissed off because they see it as wasteful, but it’s the decision of Hammons and those like him to decide what is important to him.

It might make no sense to any of us, for whom almost assured first round status in a game where virtually everyone earns more than $1 million per year would be a magical and wonderful occurrence, but that doesn’t mean that it is for him.

Painter needs to find a way to inspire a young man to embrace his potential in a game for which he has minimal love.

The question for Painter is how he can get a kid not wired to care to care a great deal.  The answer today was to take the game away from him to hope that somehow missing it will cause his behavioral compass to spin to giving the kind of effort needed for Hammons to explore his potential.