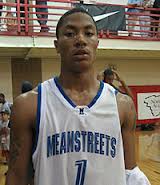 This picture was taken before Derrick Rose developed his “greed” for winning.

There was a time when Derrick Rose was just a kid hooping.  Before the national endorsement deal, before the ACL injury and his refusal to play in the playoffs, and before his recent comment that he’s greedy about winning.  In May, 2006, he was just a kid trying to win a tournament like so many other kids.

Today, he is one of the shining stars in the NBA – a guy who is seen as a player capable of putting a team on his back and carrying them to an NBA Championship.  There are still fans in Chicago wondering whether Rose should have played when his knee allowed it.

When we walked into Assembly Hall in Bloomington, Indiana, a parent from a team that had just been dispatched in the semifinals of the Adidas Invitational by Derrick Rose’s Meanstreets Express team told me, “Get ready, you have no chance.”

I asked what he meant.

“The Rose kid cannot be stopped,” he told me.

I looked at him like any father who was just told that his son’s team couldn’t do something.  He just shook his head apologetically.

Rose’s team had just beaten Eric Gordon’s team, and that was the marquee matchup in the tournament.  At that point Gordon was an Illinois commit, and Rose was rumored to be thinking of joining him, and I’m not sure whether Rose completely shot his wad in the semis or not.

The finals were scheduled to immediately follow the two semifinal games as is the case with most summer basketball tournaments.  No one knew that Derrick Rose would become the NBA most valuable player.  At that point, all anyone knew was that Rose was a top 10 recruit in the 2007 class.

The Spiece Central Stars had played against a lot of highly ranked players during the spring of 2006, and had beaten most.  Overall, they finished their four-year run together 232-29.  They were mostly unknown, but two would find their way to prominence while in college.  Matt Howard became the 2011 Men’s Basketball Academic All-America of the Year and led the Butler Bulldogs to the NCAA Championship Game in both 2010 and 2011.  JaJuan Johnson worked his way into a scholarship at Purdue, and then became a first team All-American and Big Ten Player of the Year in 2011.

In May, 2006, though they were just a couple of Indiana kids having a great time playing in Assembly Hall.

The game was not a blow out to begin with, as Spiece took a 19-15 lead, but Rose didn’t distinguish.  You could hear parents ask one another, which one is Rose?  And then the basketball started slicing through the net with alarming regularity, but no for Rose.  No, the names of the kids hitting a torrent of shots were John Ashworth, Zach Hahn, Ben Botts, Nate Blank, and Ryan Sterling.  The only way any of those kids will be associated with an NBA franchise will be if they own, run, or coach one.

Click here to read about the best dentist in Indiana, and how he can be yours

Suddenly, the halftime score was 45-19, and the game was all but over.  The second half started like the first had ended with a bunch of made shots in a row until the score grew to a strange looking 61-19 with just over 12-minutes left.

At that point Mean Streets pulled the plug.  Rose’s brother Reggie – the coach for Mean Streets – instructed one of his players to hold onto the ball near half court.  Rose repeatedly yelled from the bench, “We got what we came for!  We got what we came for!”  Not sure what that might have been.  Maybe the focus was on beating Gordon’s team, and not winning the tournament.

In four years of beating a lot of teams, this was the second time a team simply refused to continue to compete.  It’s been seven years, and a lot can change in seven years.  Maybe Rose’s greed to win wasn’t fully developed back in 2006.

Reggie Rose might have gotten what he came for, but Spiece went home with the trophy.