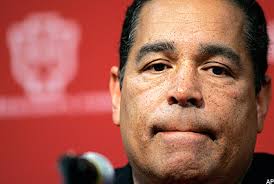 This is what the combination of arrogance, stupidity, and amorality looks like.

Regardless of what the NCAA has to say about it, former Indiana University basketball coach is an unrepentant mope.  That his penalty for brazenly ignoring rules regarding contact with recruits is lifted today does nothing to ameliorate the damage his hubris, stupidity, and amorality caused at Assembly Hall.

The five-year period NCAA member schools would have had to show why Sampson should be allowed to work as a coach is over, but the lifetime of disdain Indiana fans should feel for him should outlast his physical presence on this plain.

The NCAA has forgiven Sampson as of today.  I have not.  My hatred for this indifferent oaf will persist forever and always.

Despite my heritage as the son of a man who held enough longstanding grudges, I had no idea how he kept them straight.  I’m a big forgiver.  It always seemed to take so much energy for Dad to keep track of which stores and restaurants he would allow himself to frequent that forgiving them seems like the prudent choice.

Maybe it’s my laziness, less strict sense of justice, or understanding that everyone learns and evolves, but refusing to go to a pharmacy for 20+ years because Chuck Willms refused to allow Dad to pay cash for a purchase seems a little excessive.

The one behavior I will not forgive is hubris.  Arrogance in the face of logic is a bugaboo with me, and no one – maybe in the history of college athletics – exhibited a loftier sense of self without reason than Kelvin Sampson.

The rule that Sampson broke regarding contact with recruits no longer exists in any real way because circumventing it with throwaway phones was so simple.  Sampson didn’t trouble himself with buying throwaways at Indiana after being pinched for the same violation at Oklahoma.  Hubris times laziness usually equals disaster, but Sampson was too obtuse to adapt to that simple truth.

As a result, Indiana’s previously record of excellence in NCAA obedience went down the crapper, as did the Hoosiers program.  Careers and lives were changed.

For that, I hold a grudge.

All collegiate programs should exist as examples for student-athletes of how a professional life should be led.  The ends should not justify the means when it comes to college students.  For Sampson, setting an example was not on the agenda.

Sampson not only broke the same rule that the NCAA nailed him for when he ran the Sooners program, he made IU vulnerable to disaster through a lethal combination of indifference to rules, stupidity, laziness, and hubris.  This is a rule it is almost impossible to get caught breaking.  Ivy League programs violated the rules repeatedly, and they don’t offer scholarships!

Indiana has come out the other side of the problems that Sampson created, but it took three years of tenacity from Tom Crean, the commitment of Cody Zeller, and the work ethic of Victor Oladipo to get it done.

The worst part of the whole twisted story is that it really wasn’t so much the action of Sampson, but the entirely avoidable decision to hire him that caused the dominos to start falling.  Whether it was IU President Adam Herbert or AD Rick Greenspan who was ultimately responsible for inviting the slow-witted fox into the Hoosiers henhouse doesn’t really matter.  At the minimum, Greenspan is responsible for allowing Herbert to exert his will.

A man who cared about Indiana University would have packed a box rather than stand by as Herbert instructed him to choose Sampson.  If I knew that Sampson was in trouble at OU, and was a rogue when it came to matters of compliance, Greenspan sure as hell should have.

Greenspan’s career is likely at an end after being kicked to the curb by Rice after making a series of bizarre and insensitive remarks to student-athletes, and Sampson continues to work as an assistant coach for the Houston Rockets.  Neither is of any use in my world, and I only wish to be in a position of power one day so that I can bring upon them both a measure of the misery they brought to Indiana University.

Forgive and forget?  Not in the hearts and minds of those who give a damn about right and wrong.

Someone is likely to hire Sampson because he didn’t get fired for losing, and in today’s world of college athletics, that is the only unpardonable sin.  Good luck to that school.  They will get what they deserve.