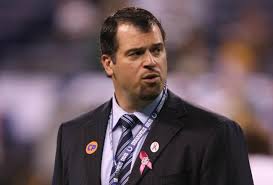 There are few things that get good coaches and general managers fired more quickly than not controlling and then meeting expectations.

It should have taken the Indianapolis Colts three years to rebound from the pit of despair in which they cratered in 2011.  That 2-14 campaign was an exercise in misery from which many franchises never rebound, but the prize for their woeful performance was the #1 overall pick in the 2012 NFL Draft and he made a profound difference.

Choosing once per generation quarterback Andrew Luck at number one set the course for one of the most dramatic turnarounds in the history of professional sports.  Finishing 11-5 in 2012 set the stage for fans to buy into the myth that 2011 was a simple aberration.

They believed – despite the spare parts gathered on both sides of the ball to accompany Luck – that the Colts would take a step forward this season.  Early season performances, and a 6-2 record at the season’s halfway mark caused fans to indulge in dreams of a deep playoff run.

Never mind the injuries and holes all over the field (and not those created by an offensive line), the Colts were 6-2, and that’s halfway to 12-4 – likely good enough for a first round bye come January.

The Colts were then exposed by an improving Rams team in a 38-8 drubbing.  Three days ago, the Arizona Cardinals embarrassed the Colts 40-11.  With five games left in the 2013 season, the once very secure stranglehold the Colts had on the AFC South suddenly appears tenuous.

Fans are getting nervous, and that means they begin looking for someone to blame, and those accusatory eyes usually land on the guys in charge.

The problem isn’t that the Colts aren’t very good right now.  No, it’s that fans were duped by the 6-2 record into believing they were.

Smart executives make certain that winning can’t occur before a team is ready.  Look at Chicago Cubs President Theo Epstein.  During the past two seasons, as the Cubs started to play with some cohesion and purpose, Epstein dealt all the valuable parts.

Gone were Matt Garza, Scott Feldman, Alfonso Soriano, David DeJesus, Geovany Soto, Ryan Dempster, Paul Maholm, and others during the last two seasons in July sell-offs.  Some brought solid prospects, and others not so much.  What the Cubs really did was manage the expectations of the media and fans who are now conditioned to hope for 70-92 in 2014 as they await the arrival of the kiddie corps expected to make the team competitive in 2016.

Success in 2016 will likely equate to a .500 record for fans, and given that 2016 is the last year in Epstein’s five-year deal, that makes a lot of sense.

The Cubs have virtually no pitching at all – no one posted double digit wins in 2013 – but they are shopping the reliably mediocre Jeff Samardzija.  Building for the future at the expense of the present is a good way for Epstein to motivate owner Tom Ricketts to throw a couple of extra years on his deal at $5-million per.

The Colts are building for the present at the expense of the future.  Worse, Grigson and Pagano not only have made moves that have fans excited, but have made owner Jim Irsay a believer that they can win now.  Yikes!

Grigson and Pagano need to be right or the chorus of fans led by their mercurial owner will rise in volume.  The Colts need wins beginning this Sunday at home against the only AFC South team that has any chance to catch them.  A loss will pull the Titans to within one game with four to play, and the fans calling for a coaching change will begin to sound less like kooks, if only because there will be more of them.

The sins of the Colts front office aren’t in the drubbings the team has suffered at the hands of the Rams and Cardinals, but in the unexpected wins that gave fans hungry for wins hope that they would continue uninterrupted, just as they did from 2003-2009 when the Colts never lost more than four games in any season.

The final five games of the season will either bring redemption for the Colts, or see the season that looked like it might end with a Super Bowl  completely unravel.

That’s what makes an NFL season so much fun for fans – the narrative of a season is unknown until it ends.  What seems a sure thing never is.  It might drive coaches and front office types crazy, but fans look forward to each week’s games like the next chapter of a great novel.

Meanwhile, we will amuse ourselves with the tweets from the guy leading the band of crazies into hysteria: