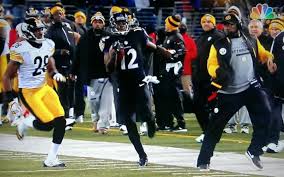 Mike Tomlin moves into and out of the path of Jacoby Jones – a choice that cost him $100K.

Pittsburgh Steelers coach Mike Tomlin and Brooklyn Nets coach Jason Kidd are embarrassments to the world of the corrupt and amoral.

Tomlin wandered across the sidelines on to the field of play into the path of Baltimore Ravens kick returner Jacoby Jones, whose route to the end zone was altered.  A tackler caught Jones soon after he narrowly avoided contact with Tomlin.

With the Nets behind and out of timeouts late in a game last week, Kidd asked a Nets player to run into him so that a soda he was carrying would be knocked to the floor, causing a stoppage in play that would allow them a last second shot.  Just prior to the spillage that benefitted the Nets cause, cameras caught Kidd telling a player, “Hit me!”

Tomlin claimed to have been excitedly watching the play on the Jumbotron with his back to the play, but was betrayed by a wide grin shortly after doing his part to help his special teams coverage.

For the love of Richard Nixon, doesn’t anyone know how to be a crook anymore?  You keep your circle of conspirators tight, never acknowledge your deceit, and scream “LAWSUIT!” as soon as anyone implies wrongdoing.

Kidd committed his crime in full view of cameras, and was fined $50,000.  Tomlin giggled like a high school junior who just swiped a pad of hall passes, and was hit with a bill for $100,000.  Both accepted their punishments without complaint.

During my formative years, I engaged in more than a few activities that involved a little duplicity, and once as a ninth grader was accused of practicing “covert behavior”.  My parents took offense because if my behavior had truly been covert, the teacher would never have known what I had done.  They were sticklers for language, if not chaste behavior.

Finally, I realized that I was incapable of the dishonesty necessary to get away with anything.  I like a good story more than I loathe getting pinched, so I stopped trying to game the system.

There is nothing wrong with telling the truth – or showing it – unless you also have a little larceny in your heart.  Kidd and Tomlin compete hard, really hard, but if they aren’t willing to sell an alternate version of events that exonerates them, they are going to find the thickness of their wallets diminished.

Life is always about compromise.  Honest crooks get caught, and dishonest saints are anachronistic and likely psychotic.  If you want to flout the rules, learn to sell your lie.  If you are committed to living a decent life where fairness is indulged, why would you lie to anyone?

Kidd and Tomlin failed in the first rule of behavior governance, and that is to be who you are at all times.  If they are scofflaws, own it.  If they are honest citizens, own that.  Trying to walk on the median gets pedestrians killed, and embracing both evil and good gets coaches and players fined exorbitant amounts of cash.

If Kidd and Tomlin are looking for a role model in the world they clearly suck at living in, the guy running things for the New England Patriots is a great guy to start with.  For an advanced course, the people down in Big Blue Nation know a guy who coaches at Rupp Arena who’s been doing it right for 20 years.