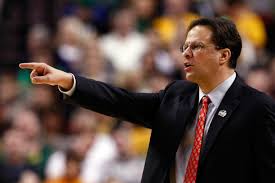 Tom Crean couldn’t point the way to victory last night, but that doesn’t mean the program isn’t on the right path.

There are a couple of positive things Indiana fans can count on from Tom Crean and his staff – excellent recruiting and a successful strength and conditioning plan for players to become physically able to compete at the highest level.

Unfortunately, there is some negative too.  It doesn’t look like the players develop an intellectual understanding of the game.  There are glimpses of really smart basketball, but the unnecessary turnovers and fouls occur with far too much frequency, and it isn’t just the freshmen making errors.

Will Sheehey picked up a bad first foul early in last night’s game where he bodied a cutter in a way that the referee couldn’t ignore, and then his third foul was a pointless hand check.  Sheehey is a senior, and should know better at this point.  As a leader, he needs to set an example.

Last night, I kept yelling a John Woodenism at the TV – “Be quick, but don’t hurry.”  The Hoosiers seemed committed to doing the opposite.  They hurried, but weren’t very quick.

In Indiana and Crean’s defense, Syracuse executes the basketball version of what Navy does to college football defenses.  They are a lone wolf of playing a 2-3 zone exclusively with that level of athleticism.  Preparing for them is tough.  As a result, getting the players to act reflexively rather than thinking through every decision is most difficult.

Conversely, they rushed into their transition offense, and that gave an advantage to the Orange as well.

Dan Dakich made a great point during the game that someone needs to play behind the zone, meaning staying closer to the baseline than the defender in the middle of the 2-3.  That forces correct spacing, and opens the high post.  Indiana did that very sporadically.  Noah Vonleh appeared to be most comfortable finding the middle guy and posting him halfway up the lane.

Beating fourth ranked Syracuse on their own floor would have been a massive upset, and the Hoosiers hung in for 22 1/2 minutes.  The 33-33 score at that point was as good as it got for IU, as the Orange outscored the Hoosiers 36-19 from that point until it was time to board the plane home.

Obviously, Indiana had trouble last night, which was expected, but what does it mean for the rest of this season and beyond?

The pieces for Indiana appear to be talented and athletic, but my complaint with teams coached by Crean is that they don’t always interlock effectively.  Given the lack of experience on the roster, it’s early to expect seamless execution and maybe unfair to expect better than what the Hoosiers have shown during the previous five years, but I can’t help but feel there is a piece missing that will continue to cost Indiana chances to win.

It’s hard to bitch and moan about the season IU enjoyed last year – the first standalone Big Ten Championship in 20 years was a hell of an accomplishment.  A flameout in the Sweet Sixteen happens to everyone.  Mike Krzyzewski is a hell of a coach, but in 2012 he lost a first round game to Lehigh – a 15 seed.  No one in Durham thinks ill of Coach K.

One thing that irks me about Crean’s reputation as a coach is the media’s relentless use of the phrase “master of Xs and Os” to describe him.  That can mean any number of things, and only one of them is positive – that he can diagram any offensive or defensive scheme ever used.  What it also means is that terms like “master of getting the most out of his players” have not been chosen by experts to describe him.

Indiana is going to look great on some nights, and not so great others.  The Big Ten isn’t quite the murderer’s row it was last year, so there is a solid chance for Indiana to finish the conference season as high as fourth.

With the #2 and #4 picks in the 2013 NBA Draft coming from IU, Crean and his staff have shown an ability to develop players to a very profitable level.  It’s not like Victor Oladipo and Cody Zeller were thought to be #1 picks coming out of high school.  That is going to have a very positive effect on recruiting, and as old coaches say, “It’s not about the Xs and the Os, but the Jimmies and the Joes.”

If the master of the Xs and the Os earns the services of the best Jimmies and Joes, Indiana fans will have every reason to expect championships, right?

14 thoughts on “Indiana Basketball – 12 Hours After Second Half Collapse Against Syracuse, Where Are the Hoosiers?”