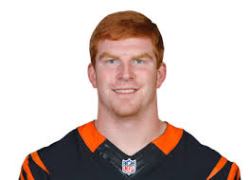 Bengals quarterback Andy Dalton has the gift of angry eyes, even when smiling. That doesn’t give him any advantage on the football field, but it does make calling him Uncle Leo after the Seinfeld character a lot of fun.

This is an intriguing game because it will go a long way toward settling which soon-to-be division champ will be the #3 seed because the Indianapolis Colts and Cincinnati Bengals were built with radically different strategies.

It will also be a validation for one of two teams built in very different ways.

The Colts like to talk about a code of behavior and citizenship represented by the Horseshoe, and the Bengals target players who have a screw loose, wind up on every other team’s do not draft list, and get great value as a result.

The Bengals are the Bungles, and the Colts rebuild Kokomo after tornados destroy part of the town.  The Colts bring in a middle linebacker from the CFL with impeccable character in Jerrell Freeman, and the Bengals sign the talented but very flaky Vontaze Burfict.  Both play at a high level, but come have radically different psychological profiles.

Both teams have arrived at the same place by taking different paths.  The Colts and Bengals are currently tied with 8-4 records, and the winner of this game will have a stranglehold on the #3 seed in the AFC, and a chance to move up to #2 if the New England Patriots falter.

The Bengals do some very interesting things on both sides of the ball to maximize the positives their talent can bring to the game.  The Colts have won three of their last five while being outscored by 45 points is anyone’s guess.

Here are five things to look for Sunday, and to be honest, I’ve spent a lot of time talking to, listening to, and reading Coach Rick Venturi’s thoughts on the game, so if he recognizes the spirit of some of these observations – my apologies.  I try to make them my own, but he knows so much that I would be a fool to reject them based purely on principle.

Block Vontaze Burfict – The guy is a wrecking machine with 130 tackles in 12 games.  The guy with the next highest total for the Bengals is Rey Maualuga with 61.  He moves exceptionally well, and is unafraid to hit somebody with authority.  In fact, this entire defense hits with ill-intent.  The first thing I noticed was the sound of the hits by the Bengals.  I thought maybe it was the audio mix from the broadcast as it was recorded on NFL.com’s Game Rewind.  Then the Chargers defense took the field.  It wasn’t the mix.  The Bengals don’t run into the ball carrier, they run through him.

Burfict is also a talker who baited a Chargers offensive player into an unsportsmanlike conduct flag by whispering something in his ear.

Offensive needs to communicate on second or third and long – The Bengals love to line seven guys across the line shoulder to shoulder.  Sometimes three drop into coverage, sometimes two, sometimes one, and the rest of the time they bring the house.  The pressure comes from different places every time, and I saw no obvious way to predict which would drop and which would come.  Receivers need to know to look for the ball quick, the running back(s) need to pick up the blitz, and linemen need to look for stunts that sometimes accompany the blitzes.  If everyone does his job, Andrew Luck will live to play against the Wade Phillips led Houston Texans on December 15th.

Pick on PacMan – I was surprised by the Chargers game plan to pick on a guy I thought was a very competent cornerback.  They made it work quite often.  When I asked Venturi about it, he said that Jones will lose discipline occasionally and that big plays can be gotten if you catch him guessing or sleeping at the right time.  The Chargers only scored 10 while trying to attack Jones, but that had more to do with their inability to run than their choice of foes in the secondary.

Succeed on first down – This is a great Venturi-ism, success on first down leads to third down conversions.  If the Colts are staring straight down the barrel of 3rd and 10 all day, the 110 mile bus ride back to Indy is going to feel like twice that.  Running the ball is tough against Burflict and his crew, so keeping play action viable by getting modest chunks on first and second downs is key.

Manage damage done by A.J. Green – The Bengals offense is nothing to wax rhapsodic about with only one stellar player.  Dalton is Andrew Luck Light, and the running game is okay because the offensive line is very competent.  The dynamism comes entirely from Green.  The Bengals like to get Green the ball in space and let him make people miss.  They run a lot of pick plays for him, and if the opposing corner gives a cushion, Dalton turns quickly and throws Green the ball.  If through confusion the help from a safety isn’t there, it’s seven for the Bengals, as it was the one time a Chargers safety bit on another route.

Green has 1,103 yards receiving after 12 games, and ranks second in NFL history by starting his first three seasons with 1,000 yards or more receiving (Randy Moss is first with six), so those who believe him to be a top five receiver in the NFL aren’t talking out of their rear ends.

There are many other issues, like making sure gap integrity is maintained against the run, but that’s a big deal against every team.  Saying Colts receivers need to hold on to the ball and that Luck needs to be protected are givens.

The Bengals are also 5-0 at home this season, so you can choose your inference there – either they are dominant in Cincinnati or they are due for a beating at home.

Colts players and coaches should also stay away from Skyline Chili as it raises unholy hell with a digestive system.  It’s delicious, but there is an unpleasant price.

This game looks like a train wreck for the Colts, who are six point dogs.  I hate that spread for those betting the Colts because they win one possession games, so anything under +9 is really a straight up bet.  If you need to bet Indy, take them straight up for -130.  I feel like this is a terrible matchup for the Colts who have lost badly to their two reasonably talented opponents since Reggie Wayne’s injury.