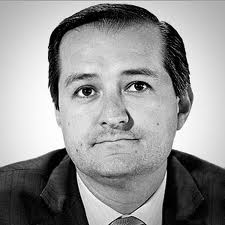 In black and white, Cubs owner Tom Ricketts looks like a tax collector ready to throw Ward, June, Wally and the Beaver into the street as he forecloses on the Cleaver household.

Gordon Wittemyer does great work covering the Cubs for the Chicago Sun-Times.  He’s about as down the middle as it comes for honest coverage of a team that appears more and more to be lacking leadership at the top.

There was good news and bad news from the top of the Cubs corporate food chain as owner Tom Ricketts addressed Wittenmyer and the rest of the media at Baseball’s winter meetings being held at the Dove and Swan Resort near Walt Disney World.

The bad news was he shared nothing about future plans for renovations to Wrigley Field, the TV deal that should provide an influx of additional cash, or when the Cubs might start spending money to acquire players that can help the team justify the out of whack ticket prices (third most expensive in baseball in 2013).  The good news was that he didn’t lie or threaten to leave Wrigley Field for Schaumberg, DeKalb, Itasca, or Bannockburn.

Wittenmyer quotes Ricketts responses to various issues – it makes no difference to what he was referring.  No context is necessary to understand his thoughts:

Well, there you are.  Fire up, Chicago!  Buy those season tickets now.  Get on board.

As I’m writing this, the excellent coverage of the winter meetings continues on MLB Network with an announcement the Cubs have traded Brian Bogusevic for Justin Ruggiano.  Hot damn, the missing piece of the puzzle is coming!  Ruggiano hit .222 for the Marlins in 2013, and if that doesn’t excite you, he’ll be 32 a week after opening day.  His 114 strikeouts, .298 OBP, and under .700 OPS make him a perfect fit for the Cubs.

This trade reeks of a team that needed to show movement somehow, someway.  Expense reports without activity are frowned upon.  Even a meaningless trade that swaps a middling left-handed handed bat for a middling left-handed bat shows that team president Theo Epstein and general manager Jed Hoyer are aware that the Cubs have just completed the worst three-year run in the history of the franchise.

Ricketts non-comments show the stress of owning a franchise going nowhere.  He used to enjoy telling people how the sausage was made as he indulged his dream of owning the Cubs.  Not so much fun anymore.

Without the money to compete for the occasional free agent for fill holes, the Cubs will never be able to compete in the NL Central Division.  Even if they could magically throw the calendar forward two years so the much ballyhooed Javier Baez, Jorge Soler, Kris Bryant, and Albert Almora became ready to contribute, there is nothing to suggest they are ready to win more games than the Cardinals.

The Cardinals drafted Michael Wacha in 2012, and he led them into the 2013 World Series.  The Cubs signed Edwin Jackson to an absurd four-year deal, and he led the Major Leagues in losses with 18.  That’s called backpedaling while already in a position of weakness.

Epstein mentioned that the business and baseball sides of the Cubs operation were coming into sync, and Ricketts spoke like he had no idea what he was talking about.  Epstein said that the Cubs are coming to the point where they will be major players in free agency and will help drive the market.  Ricketts, according to Wittenmyer, appeared baffled by the comment.

Cubs fans and Chicago media need to see the Cubs under Ricketts for what they are – nickel and dimers trying to sell hope where none exists.

Ricketts, Epstein, and Hoyer are building for an uncertain 2016 by gouging fans forced to watch bad baseball from 2012-2015.  If they want to sell the future to fans, the fans should wait to invest hard-earned cash until the future is now.

If you want to go retail deep into your pocket to watch an outfield of Sweeney, Schierholtz, Ruggiano, and/or Lake play behind Edwin Jackson or Carlos Villanueva as shortstop Starlin Castro watches the Red Line trains speed past – you go right ahead.

One thought on “Chicago Cubs – Tom Ricketts Comments at Winter Meetings – Vague, Not Dishonest Is a Step in Right Direction”