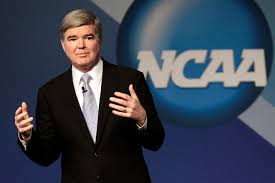 When? I don’t know, but college athletes who demonstrate value related to revenue generation for their schools will be paid for their services beyond the cost of a college education.

It might be in two years, five years, or 20 years, but student-athletes who are forced to utilize college athletics as a de facto minor league will be paid proportionate to their worth.  Why?  Because it’s the right and logical.

Before we weigh into the portions of Emmert’s presentation at the IMG Intercollegiate Athletics Forum in New York City that deal directly with pay-for-play, one area with which I agree completely is in his assessment of the morality of the one-and-done rule in college basketball, “It’s illogical to force someone to go to college when they want to do something else,” Emmert said.

I would go further, but if Emmert wants to use illogical rather than immoral, that’s fine.  Those who worry about the diminution of talent in college basketball that would occur if players were allowed against to jump directly from high school to the NBA waste their time.  That’s not what happened before, and it wouldn’t happen in the future.

Emmert went on, “When LeBron went (straight from HS to the NBA), we still had a Final Four and it was pretty good and people showed up and we had good numbers, and nobody said college basketball sucked because Kobe went.”

Whether Andrew Wiggins played a single second at Kansas or became a member of the Charlotte Bobcats, people would watch the Jawhawks.  College basketball is about tradition, heritage, and competition.  The ability to succeed is relative to the talent of those on other rosters.

But where is it written that college students who generate big money can’t earn a commensurate share of that money.  When a coach like Nick Saban is likely to sign either an extension to stay at Alabama or a new deal to go to the University of Texas for $10 million per year, does it make any sense for a student athlete awaiting the moment at which he is eligible for the draft to live like a pauper?

They lose eligibility for profiting from their image, while the schools are able to raise money for by auctioning swag featuring the signature of those same student-athletes.

Contrarians point to the value of a scholarships as evidence of compensation that must be judged as part of the equation.  No question that the student-athletes for all sports are treated well at most schools.  Universities who see their roles in the development of minds and bodies do wonderful work making their educational efforts worthwhile.  Some aren’t so generous, but even at the schools who do it right, the money generated through the work of the players dwarfs that which is provided to them through goods an services related to their scholarships.

Big Ten President Jim Delany is a really smart guy, but at the same conference where Emmert made his comments, he said that “asking to pay student-athletes is the same as mandating that a pro athlete go to school.”  No, it isn’t.  It’s nothing like that.  What it’s like is asking a coach to accept only a professors’ salary plus tenure as his or her compensation for coaching.

Click here to trust the care of your teeth to the best dentist in Indiana – Dr. Mike O’Neil at Today’s Dentistry

Emmert addressed the licensing issue which brings an obvious dilemma with the potential for boosters to buy autographed items at outrageous prices as a legal workaround for the $500 handshakes that are blatantly against the rules, and also spoke about the discrepancy in value from one school to another, “I think the key issue for the members is, how would you have such a model that doesn’t become a recruiting debate?”

He’s right to see the limitations and potholes inherent in any system with a fluid valuation of human assets, but it’s no excuse for using the services of student-athletes to make members of a third party very wealthy while forbidding efforts for human beings to capitalize on their own image during the limited period during which it has value.

The right thing will eventually be done because the promise of the right thing being done eventually is what makes waking up in the morning worthwhile.  Whether it’s through a radical adjustment in the thinking of the current administrators or the launching of a rival college oversight group, logic will win.