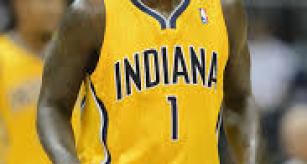 How hard is Tom Crean willing to work? Thiiiiiiis much!

Cynics among Indiana Basketball fans have called for the curtain to come down on the 2013-2014 Hoosiers season for weeks, but with two games left Indiana is still playing for a chance to get to 9-9 and lay claim to an at-large bid to the Big Dance.

This team was left for dead after home losses to Big Ten cellar dwellers Northwestern and Penn State.  Another loss to the third leg on the last place stool in West Lafayette didn’t help, but home wins against #3 Wisconsin, #10 Michigan, # 20 Iowa, and #22 Ohio State have kept the Hoosiers heart beating.

At 7-9, Indiana is one-half game ahead of Minnesota, a game-and-a-half in back of Ohio State and two behind Iowa and Nebraska.  If Indiana beats Nebraska Wednesday night, and can find a way to win what might very well be a meaningless game for Michigan in Ann Arbor, they have a chance to finish in a tie for fourth in the Big Ten.

The odds aren’t great for all those dominos to fall right, but four days ago the chances of Indiana leapfrogging six teams in the conference to reach a tie for fourth were equal to my chances of presenting an Oscar next year.

This is by far the weirdest Indiana basketball season in my memory.  Every time the Hoosiers earn enough equity to be seen as favorites, they stumble badly; every time they look dead in the water, they pop to their feet and fight.

Teams reflect the personalities of their coaches, and the Hoosiers mirror Tom Crean.  Some fans like to point to Crean’s quirks as though they define him, but the trait that is most obvious and valuable to Crean is his ability to work through adversity.  That is what Indiana has done throughout Crean’s era at Indiana.  He finds a way to compete and succeed when not gifted with the easiest of roads, and while most of the adversity Indiana has faced has been of its own creation, they have passed on every opportunity to fade.

There have been injuries, and arrest, suspensions, games filled with uninspired off the ball movement, and confusion on the defensive end, but what there has never been is resignation.  That’s Tom Crean.

Fans can question whether the offense is too complicated or the freshmen (or sophomores, juniors, or seniors) have learned enough about basketball under Crean to be able to win by using their wits, but what can’t be questioned is whether they have learned to fight and claw regardless of the improbability of success.

Indiana is in a position to redeem itself over the next five days, and that is due to the example set by Crean and his staff.

Alive is alive, and dead is dead.  The dead aren’t alive, and the living aren’t dead.  Until Indiana loses that 10th Big Ten game, they live, and they played like it Thursday and yesterday.

If Indiana wins Wednesday at home, then Saturday is the key.  If they win Saturday, they will get a reasonable seed in the Big Ten Tournament.  A couple of wins in Indianapolis, and IU goes into selection Sunday 21-13 overall, with an 11-10 conference record.  That gets the Hoosiers in – despite a ridiculously weak non-conference schedule.

Today, the Hoosiers are on the outside looking in at 17-12 overall, 7-9 in conference, an RPI ranking of 76, and a BPI ranking of 62.  But the field isn’t going to be selected today.  They is still plenty of heavy lifting to do, but Crean and the Hooisers seem to relish the opportunity to prove others wrong through hard work.

Many will say what I have said in the past – that the 2013-2014 Hoosier defies explanation, but that’s not true.  I was wrong  The explanation for this second season on the brink is the same as that of Tom Crean’s career success – hard work yields a positive result.

Unlikely isn’t impossible unless you make it so.  The odds of a high school basketball player from Michigan who rarely saw the court finding a way to be the head coach at Indiana are impossible to calculate, but it happened, and makes the Hoosiers road to the NCAA Tournament look like a walk in the park.