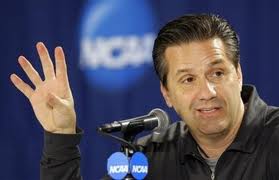 Not many of Calipari’s recruits stick around the University of Kentucky for four year.

“Calipari doesn’t like the (one-and-done) rule anymore than you do!” a relentless wave of Kentucky fans write in their comments to my posts critical of Kentucky basketball coach John Calipari.

They also write that Calipari just recruits the kids destined for the NBA better than anyone else, and to hate Kentucky for that reflects jealousy unbecoming a journalist.  Some bring up Duke and Kansas as programs that also benefit from the one-and-done rule.  The truth is that Duke has had three freshman declare their eligibility for the draft since 2000, and Bill Self has had a total of three since coming to Kansas in 2003.  From 2010-2013, Calipari has used the talents of 11 kids who spent less than one year in Lexington before jumping to the NBA.

There are insults – some funny, some silly, and others that reflect an unhealthy anger.  I enjoy the funny insults, and pity those without the intellectual wherewithal to channel their anger properly toward humor.  If you can’t be angry and funny, don’t indulge in either.

I hold no angst toward the university or the commonwealth’s people.  When Tubby Smith was the coach, I enjoyed watching the Wildcats play.  My dissatisfaction with John Calipari’s use of very talented athletes is an indictment only of him.  Those who support Calipari view the world through the opposite end of the kaleidoscope, but dissent is what makes the world go around.  Debate is enjoyable – at least for me.  Through conversation, maybe I will gain a little wisdom.

Wouldn’t that be nice?  Two commentors – Philboyd Studge and Warren from TN, I enjoy quite a bit.  Both are really smart and possess a skill in writing their thoughts that I admire.  Philboyd is always clever and Warren is sincere and thoughtful.

Let me try to explain a few things to make my point a little clearer:

Kentucky will play Michigan this afternoon for a trip to the Final Four, and I will hope that the Wolverines find a way past the minor league Wildcat franchise to earn a spot in Arlington, not because I hate UK or Kentuckians, but because I have zero respect for the way John Calipari builds and rebuilds his program.