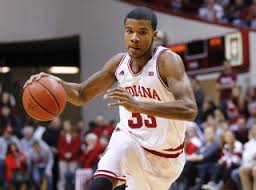 Jeremy Hollowell is no longer a part of the Hoosiers. I get that one, but any subsequent transfers will be hard to understand.

Rumors waft through media workrooms this time of year, and I heard one the other day that did not please me.  It’s not Tom Crean’s job to please anyone in the media.  He answers to his players and athletic director Fred Glass, but the fallout for another transfer will be far less tolerant than was the case a week ago when five players left.

The cases for the transfers who bid adieu to Cook and Assembly Halls last week making that decision on their own are reasonable.

Noah Vonleh is headed to the NBA as Indiana loses its first one-and-done player.  Leaving for millions and the potential tens of millions coming a year sooner after year four in the league is entirely understandable.

Austin Etherington wants to play with his brother or at Butler.  He always seemed like a guy with a Butler skill set/size.  Played well at Indiana, but family is important to Etherington and his brother is at Indiana State.  Dad played for Butler.

Jeremy Hollowell never seemed a fit at Indiana.  Always seemed to be quite near misery on the floor and bench.  If Crean instigated transfer, it’s likely that it was a favor.  Hopefully, Hollowell finds the opportunity he was seeking when he committed to Indiana, and has the discipline to achieve it.  His suspension early in the season was a portend of things to come.

Jonny Marlin left his scholarship at IPFW for a walk-on role at Indiana.  He has two years of eligibility left, and Indiana has a lot of guards.  If Marlin is transferring because he wants to play, that is understandable, and after his sophomore season is the right time.

Joe Fagan says he is leaving because he’s pre-med and needs to concentrate on academics.  Okay.  When walk-ons playing for the love of the game like Marlin and Fagan leave, I start to worry that there is something wrong with a program.   In the absence of evidence to the contrary, I’m willing to accept the most obvious answer for all five players leaving the program, including Fagan’s focus on what will be his career.

But if rumors are true, and a sixth player leaves because he is pushed, that is going to be a different issue entirely.

While scholarships are only required to be single year grants, barring a screwy incident or series of incidents that makes obvious a student’s inability or lack of desire to continue to function as a student or player, the coach and school are honor bound to maintain the scholarship.  If it becomes obvious that he will be unable to meaningfully contribute to the team, that’s too bad for the coach.

Either the coach made a mistake in recruiting a player who cannot find his way into the rotation, the player was unable to develop, or there were intervening injuries.  Either way, the player should be allowed to continue as a student on scholarship.  Indiana under Crean has never – to my knowledge – run a kid before he received his degree without ample reason, and that’s the way the Indiana culture should continue to operate.

My skepticism about this rumor from a normally reliable source is Indiana’s track record, and the questionable need for a seventh scholarship in the upcoming freshman class.  Three spots are filled by James Blackmon Jr, Max Hoetzel, and Robert Johnson.  Crean is pursuing Josh Cunningham and Yante Maten.  Temple’s Anthony Lee committed to Ohio State as a grad transfer, so where Crean might go with two additional scholarships – even if he gets Cunningham and Maten is anyone’s guess.

It should not be at the expense of a current student-athlete in good standing.

Indiana has to stand for something, and treating its students like human beings instead of easily replaced widgets should be at the top of the list.