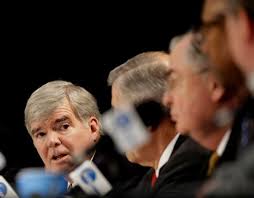 What could be more fun than watching really smart guys being held accountable for illogic, as happened yesterday at the NCAA’s annual press conference?

Bureaucrats affect change slowly, and when the window of participation in college athletics is a maximum of five years, “student-athletes” have chosen to grin and bear the inadequacies and lack of fairness they perceive.

After all a scholarship covering the costs of tuition and room and board isn’t nothing, and making waves might put those annual grants in jeopardy.

The tide is turning with the National Labor Relations Board ruling that agrees with Northwestern football players they should be classed as employees and allowed the right to collective bargaining.  Ed O’Bannon’s lawsuit over the licensing of images is scheduled to go to trial in June.  Media, fans, and athletes are incessantly bleating about the tremendous wealth being generated through and how the athletes are the only pigs not allowed to reach the spoils in the trough.

The NCAA continues to form committees, add members to committees, hold meetings among members of committees, and stonewall changes that are providing enormous profit for the schools and the organization.  Bureaucrats enjoy playing the long game because there is no reward for expedience.

Always remember that the pain of change must be outweighed by the pain of staying the same for change to occur.  Through the courts and Congress, pain is no longer lurking on the horizon; it is hurtling toward the status quo with increasing speed and confidence.

The glacial changes for the NCAA have not pleased those who see the “neo-plantation mentality” of college football and men’s basketball as being unfair, and their bloodied foreheads are staggering away from the brick wall in Indianapolis toward more welcoming ports of redress.

The NLRB ruled in favor of Northwestern football players who claim they are employees compensated through scholarships for their athletic efforts in the weight room and on the field.

In yesterday’s state of the NCAA press conference, president Mark Emmert stated the obvious, “You’re either a student at a university playing your sport or you’re an employee of that university.  If you move to a model where you have labor negotiations between management – that would be coaches and athletic directors – and student-athletes to determine everything about what that relationship should be, is a wildly different notion than saying these are students.”

In what way student-athletes are uniformly students would have been interesting to hear him explain.  Many coaches consistently mandate changes in a student’s major to accommodate the athletic schedules, and just as often steer them away from a rigorous academic schedule in order to manage the program’s academic progress rate and ensure graduation.  All enforce a 12-month per year schedule of athletic work.

College athletics isn’t a sham everywhere in the five power conferences in Division One, but the money coming to the schools, coaches, and administrators is completely out of whack with the educational mission of a traditional university.  University presidents know the score, and while they would love to see the status quo maintained, it’s clear to them that embracing change is now a requirement rather than a choice.

The time for endless meetings has passed because the evolution will either move through or around them.

Click here to get your teeth in comfort by the best dentist in Indiana – Dr. Mike O’Neil of Today’s Dentistry

Kansas State president Kirk Schulz said, “I think there’s a perception at times that we’re asleep at the switch.  I think most of the membership recognizes we’re at a fork in the road and some of these things must change and we need to do it rapidly.”

His fork in the road analogy gives the impression that they have a choice of which direction college athletics will move, which is a fallacy.  Players ARE going to be paid something.  They ARE going to be able to control the licensing of their image.  And they ARE going to have a voice in how money they generate will be distributed.  The only if is whether university presidents will turn the wheel at the fork, or have it turned for them by the courts and/or Congress.