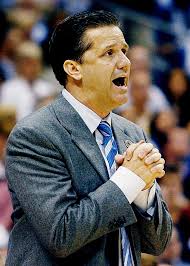 “Gee, I hope my salary is doubled because of Rex Chapman’s tweet!” John Calipari seems to be wishing.

I may not agree with John Calipari’s use of the one-and-done rule to feather his nest and create a revolving door of single-year talent at a four-year university, but anyone underestimating his intellect and street savvy makes a serious error.

Last night, former Wildcat and brutal game analyst for Saturday’s semifinal game between UK and Wisconsin, tweeted that Calipari’s departure for Los Angeles to coach the Lakers was a “done deal”.  The question of whether Cal would be leaving was asked at the post game press conference (along with the usual insipid apology for a good question by the guy who asked).

What I thought when I heard the answer live was, “Boy, that’s exactly what a really smart guy should say if he wants to leverage a rumor to extort an extension from his current employer.”  He made four statements in the 11-seconds:

Whether you love or loathe Calipari, people should listen to him and learn how to negotiate from a position of strength from him.

Am I saying that this episode was concocted from soup to nuts by agent Worldwide Wes and Calipari to use the brightest spotlight in college basketball to force an extension?  That a rumor about the soon-to-be open highest profile coaching job in basketball was started by Wes or Cal through willing ambassador Chapman to force UK to counter against a mythological competitor?  I would love to say that, but who knows what evil lurks in the hearts on men?

I will say that it’s what really smart people in positions of strength do all the time, and that we’ll find out one way of the other when Calipari either signs an extension at UK or bolts for the Lakers.

Calipari’s current deal pays him an average potential $5,54 million per year (with incentives) through 2019.  Krzyzewski reportedly was paid more than $9-million in 2011, the last time Duke won the national championship.

Krzyzewski has suffered a first round crap out in two of the previous three years against a 14 and 15 seed, while Calipari has gone to three final fours and an elite eight in his five years in Lexington.

If anyone doubts Calipari’s strategic acumen, they need look no further than his masterful handling of his own career.

Calipari is the master, and even if the Chapman tweet wasn’t a plotted contrivance to prompt a flurry of talk, his non-denial denial was a stroke of genius, and it will be rewarded one way or another.