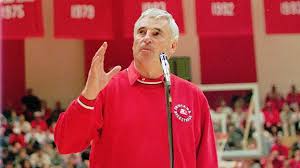 Bob Knight was an unrepentant jerk, but he taught IU fans basketball as he knew it. And they still know it that way.

For 30 minutes prior to every game he coached for several years in the mid-to-late 1980, Indiana University basketball coach Bob Knight taught a master class in roundball.

This was the most informative pre-game in the history of televised sports with Knight sharing the specific game plan for how his Hoosiers would defend and attack that night’s opponent.  It seemed insane at the time, almost a dare to Bill Frieder, Lou Henson, and Dr. Tom Bouncepass to watch and try to beat Knight.

Viewers watched and learned the details and variations of motion offense and man-to-man defense that Knight would employ to win many more than he lost over the course of 29 years in Bloomington.  Through his first 22 years at IU, Knight won three National Championships, almost 90% of home games, 11 Big Ten Championships, and compiled an overall record of 517-156 (a winning percentage of 76.8%)

When the author of that success spoke, Indiana fans paid close attention – and some still do.  Over the years, Knight taught thousands what they know about basketball, and that doesn’t include the single credit class he occasionally taught as part of the HPER curriculum.

Indiana fans didn’t just watch basketball, they began to understand they game at a higher level, or so they believe.  When they watch Tom Crean coach the Hoosiers, it is seen and evaluated through that Bob Knight prism.

Indianapolis Star IU athletics beat writer Zach Osterman wrote in today’s piece about Knight, “Does Knight still cast a shadow over the program he led to three national championships, one with which he was synonymous for so many years? Everyone interviewed for this story suggested that the answer was no.”

Those people don’t listen to the fans who are 40 and older who watch the Hoosiers play and can’t figure out what the hell is going on because it doesn’t gibe with Bob Knight’s lesson plan.  The dissatisfaction among alumni with Crean’s methods can be traced directly back to Knight, and that is as big a shadow as the one his hulking figure cast on campus for so long.

Virtually no one would want Knight to return to Indiana as coach because self-indulgence on the scale Knight enjoyed is only tolerable when accompanied by hanging banners.  When the championships stopped, in large part because of Knight’s indifference to recruiting, the amusement with which fans viewed his embarrassing antics waned.

Finally, even the covert and clumsy way with which Knight was dispatched seemed a just result.  Those who remember the “zero tolerance policy” that ended the Knight era were repulsed by the methodology of the firing, but by and large agreed that it was time to turn the page on the General.

In that sense, there is no shadow, but there will be a very well-educated group of basketball fans who will evaluate IU coaches through eyes trained by Knight.  That might make Indiana the toughest place to coach in basketball – college or pro.

Knight will speak in Carmel tonight, and he will share his version of the truth in the plainest language imaginable.  His latest descendent in Bloomington knows more about basketball than he gets credit for, but his truths are not told with the same flair, and his lessons about basketball are not as blunt and transparent as Knight’s.

That makes it hard for the IU alums who graduated from 1973-1994 to embrace Crean with the same verve and respect they reserved for Knight.

Call Knight’s lingering specter what you like – legacy, birthright, shadow, or curse – but it doesn’t make Tom Crean’s job any easier.