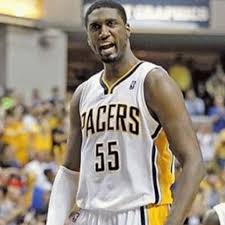 For Roy Hibbert, the problem isn’t heart or confidence, it’s legs. When they come back, he’ll be the player who is cheered not booed by home fans.

After a disheartening game seven loss to the Miami Heat in the Eastern Conference Finals, the Indiana Pacers dedicated themselves to making certain the next game seven against the Heat would be at Bankers Life Fieldhouse.

The front office went to work signing C.J. Watson and Chris Copeland, and trading Gerald Green and Miles Plumlee for Luis Scola.  The players and coaches also prepared for a run at the franchise’s first NBA championship.  When training camp opened, the five-on-five portions of the workouts were harder fought than some regular season games.

A 33-7 start to the season followed, and the stories from the road sounded like tales from summer campers who loved being around one another.  C.J. Watson being locked in a bus bathroom was hilarious.

Because of the hot start, the Pacers became ESPN’s flavor of the month.  All of a sudden they were the hunted, rather than the hunters.  The media tried to find flaws because that’s what the media does.  They invent wounds, pick the scabs, and bicker about why the patient is bleeding.

The freewheeling and fun-loving Pacers became a different animal after their 40th win that took their record to a gaudy 33-7.  All of a sudden winning wasn’t so easy anymore, and the losses came nearly as often as the wins.  Since game 40, the Pacers are a less than robust 22-19.

As the Pacers cartwheeled toward mediocrity, the media busied itself by picking the same scab each day trying to guess the cause.  One day it was fatigue, the next an evaporation of chemistry, the next the Andrew Bynum signing, and once Danny Granger was dealt for Evan Turner and Lavoy Allen – that became the answer du jour.

They were right the first time.  Concentrating virtually every night for the first 40 games – the only obvious exception being the home loss to the Detroit Piston on December 16 – is exhausting, and an offseason consumed with the regret of coming one game from a trip to the NBA Finals led to serious mental and physical fatigue.

It sounds silly to be tired of playing basketball, but it happens.  It sounds silly to be in great condition but getting physically tired, but it happens to marathoners, swimmers, and even bowlers.  The timing and duration of their periods of rest are as important as the periods of hard work, and if the Pacers needed rest, March was not a good option.  Eighteen games (11 on the road) in 31 days doesn’t allow much room for refreshment.

The Pacers have been waiting for a chance to get another bite at the postseason apple for more than 10 months.  That’s what the regular season was for them – a ticket to redemption.  Once they proved to themselves they were capable of being the best team in the NBA, the edge was gone, and with that edge went their legs and brains.

After tonight’s exercise in futility in Orlando, the Pacers will be exactly where they wanted to be from the beginning and it will be up to them whether they can turn back the clock to January 20th when the game was fun and life was easy.  They worked tirelessly to earn the #1 seed in the East, and they got it.

Despite finishing either 23-19 or 22-20 over their last 42 games, depending upon the result of tonight’s game, they are still the best team in the NBA at home by at least two games with a 35-6 record.  The naysayers are everywhere, doubting Roy Hibbert’s motivation and Frank Vogel’s ability to adjust his rotation.  Fans booed Hibbert Sunday at Fan Appreciation Day, for God’s sake.

Expectations got out of line with 33-7, and now the criticism drowns out the cheers.  That’s okay.  The media and fans don’t defend, shoot, or move the ball.  The Pacers do, and despite the wayward protests of ESPN’s Brian Windhorst, the Pacers know exactly who and what they are.

Right, fellas?  Back me up here.