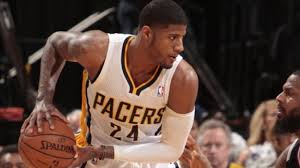 Paul George had a great stat line with 26 points, 12 boards, and six assists and steals, but stats don’t win games.

Swiss psychiatrist Eugen Bleuler coined the term ‘schizophrenia’ in 1911.  The first half play of the Indiana Pacers re-defined in the first half of their 107-97 loss tonight to the Atlanta Hawks.

After leading through most of the first quarter and finishing with a 21-20 lead, the Pacers went on a vacation that brought their offseason break to within 48 minutes of basketball Wednesday night in Atlanta.

During a thoroughly miserable 1:46 stretch at the front end of the quarter Hawks sharp shooter dropped four triples right on the Pacers head.  For the quarter, the Hawks hit 9-of-11 threes in the second quarter, and the slim Pacers lead became an impossible to overcome 61-40 deficit.

Not that the Pacers didn’t gamely compete once the lead ballooned to 30 with 7:07 left in the third quarter, cutting it to eight toward the end, but this game was over once Scott hit that crazy run of triples.

The only thing consistent about the Pacers is their absolute inconsistency, but fans used to be able to count on the inconsistency to run from game-to-game rather than quarter-to-quarter.

So now the Pacers head to a real must-win game in Atlanta down three games to two, and not even the famed Dr. Bleuler would care to venture a guess as to which Pacers team might show up.  Will it be the reasonably tenacious group that came back in Atlanta Saturday afternoon, or the docile and laconic bores who stood around and watched the Hawks blow Game Five open during a 41-20 second quarter.

The sense of desperation that is usually present during the playoffs comes and goes in waves with the Pacers like hot flashes in menopausal women.

Before anyone writes the epitaph for the Pacers, remember that they defy convention and expectations at every turn.  Once you think you have them figured out, they spin around and show another side of their many personalities.

Paul George and Lance Stephenson are just 23 years old, and when a guy who proclaims himself to be the team’s leader is that young, having the perspective to dig deep and battle is difficult.  Michael Jordan was 28 when he finally got over the hump and won a championship, and George is not the player Jordan was.

Years tend to harden resolve of those not born with grit, but the Pacers have a blend of talented veterans and brash youth that has a chance to achieve greatness.  They appear content to look back on 2014 for how it began, not how it will end.

Losing to a team that was 38-44 in the regular season in the playoffs seemed impossible three months ago, but now it’s more than possible.  It’s likely.

That doesn’t mean it’s a done deal, and I still believe the Pacers will win both games six and seven, but it will take 96 minutes of focused effort, and as Dr. Bleuler advised the families of his many schizophrenic patients, “Eet iz okay to hope, but I would not count on zee patient enjoying a stretch of lucidity zat lasts quite zat long.”