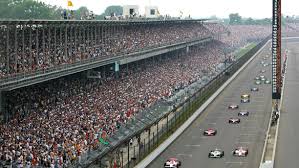 Just short of 300,000 fans will make this year’s Indy 500 the most attended sporting event in the world – as it is every year.

The Indy 500 is not the iconic event it once was, but there is still something amazing about being at the Indianapolis Motor Speedway each May.  It just feels right to come out here and watch cars fly around this place.

It’s a little different this May with the month starting not with qualifications on the World’s Greatest Race Course for the Greatest Spectacle in Racing”, but on the newly reconfigured road course for the inaugural Grand Pix of Indianapolis.

Running a second race at Indy during May makes nothing but sense.  Why not use the place more than once for a race during May?  The drivers, cars, and teams are here anyway, so running a race on May 10th is a cost-effective way to compel much more interest than extended qualifications and endless drama-less practice.

While the rest of the world adjusted to the short attention span theater the American sports consumer has embraced, Indy remained set in its ways with an incredible four days of qualifications, and more than a dozen days of practice.  I was never sure what the drivers and teams were practicing for.  Cars were not allowed to be tweaked too much, and the track is what the track is, so cars running each day seemed a perilous waste.

After two decades of tradition for tradition sake, the Indianapolis Motor Speedway is going to try to engage fans with high speed drama more often.  I love the change in attitude.  The Indianapolis Motor Speedway should be more than a living museum each May.  Finding ways to engage fans every time they come out to 16th and Georgetown is not just reasonable anymore, it’s a necessity.

The national profile for this singularly amazing event has never been lower, and fixing it will require great imagination, the occasional risk, and great patience.

It’s always been mind-blowing that the Speedway would encourage busloads of children to visit during practice days when there is no context or drama.  They were inviting people to be turned off by the inactivity interrupted now and then by a few cars running in circles, when the event itself is one of the great spectator events in the history of sports.

There is nothing in the world – nothing – like sitting in Turn One for the start of the Indianapolis 500.  It is the most thrilling thing I have ever seen, but people other than the heartiest race fans outside of central Indiana have no affinity for it because speeds have either held steady or regressed over the last 18 years.

That NASCAR is more popular than Indycar is one of the great shames of sport, but that’s what happens when a day long event called “Bump Day” is entirely bankrupt of bumps from the 33 car field.  For many years, logic and showmanship took a backseat to the status quo.

The mandate from new Hulman CEO Mark Miles is to do cool things, and that is exactly what this place needs.

Saturday, a new era starts, and tickets for a day of racing are only $25.  The month of cool stuff will end 15 days later as the field of 33 drives 200 laps after being serenaded by Jim Nabors signing “Back Home Again in Indiana.”  It will be a special moment that makes no sense at all to people outside of Indiana, but here there will be a lot of tears when Nabors warbles about the “moonlight on the Wabash” one final time.

Some traditions you just don’t mess with.

One thought on “Still something very cool about Indianapolis Motor Speedway in May; Saturday will be cooler yet”