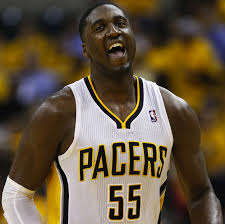 Pacers fans hope a homecoming will inspire an appearance from Happy Roy tonight.

Indiana Pacers center Roy Hibbert is going back to Washington DC, where he became a dominating presence in the Big East, and as we try to find reasons to predict whether good Roy will show up, that’s a good as any.

Nothing substantial was different between games one & two of this series, but Hibbert was a total bust in the first game with no points nor rebounds in 18 minutes, and an all star in the second with 28 and nine.

Hibbert is like my front porch light – sometimes it works; sometimes it doesn’t.  Changing bulbs and knocking on the thing guarantee nothing.  It seems to have a mind of its own.

Possible explanations for Hibbert’s light going on in Game Two include – his college coach spoke to him and attended Game Two, he and teammate Paul George went fishing on Tuesday, David West and Rasual Butler gave Hibbert a pep talk, he didn’t talk at all in the shootarouund, and Andrew Bynum was told to pack his bags.

Hibbert’s lightning fast migration from the outhouse to the penthouse might have been caused by one of those things, a combination of those things, or none of those things.  Diagnosing the psychological state of a fragile mind is best left to clinicians trained in those exploits.  I couldn’t get a rat to learn a maze in college, how in the hell am I going to crawl inside Hibbert’s brain to find answers to his motivation?

The question for tonight’s game in Washington DC is no longer how to get the light go on for the big fella, but how to keep it on.  It’s much easier for teammates, coaches, and friends to try to keep Hibbert’s fire burning than to start it.

There is no better place to do it than in Washington DC, the town Hibbert called home throughout his college career.  He has a support system there, people he trusts, and a track record of success.

All that said, Hibbert being more like the dominating center he was Wednesday versus the dour mope he was Monday is a  crapshoot that will likely be determined by a roll of the dice, and it will probably determine the outcome of the game.

There are other issues for the Pacers beyond Hibbert, like the franchise postseason low of four offensive rebounds in Wednesday’s win, Paul George’s ability to attack the rim, and George Hill’s defense keeping John Wall a non-factor scoring the basketball.

Seven-game series can be fascinating.  Each game a chapter in a compelling book, and the Pacers have been nothing if not compelling for the past six-and-a-half months.  The Pacers need to pick up one of the three games scheduled to be played in Washington and hold serve at Bankers Life Fieldhouse in order to advance to the Eastern Conference Finals.  Which of those it wins is not important.

Winning tonight would guarantee the Pacers would not face elimination in Game Five, but facing elimination has not been much of a problem in the past.  In fact, it appears the Pacers thrive when cornered.  It forces them to revert to the winning style of play that defined the 33-7 first half of the season they enjoyed.

Without the looming consequence of a premature end to their season, the Pacers have been sloppy on both ends, and have difficulty committing to the hustle and execution necessary to beat good teams.

Nothing tonight would be surprising – other than a Pacers blowout win.  A blowout loss would be par for the course, they have been allergic to taking a series lead.  Hibbert being an active and engaged participant regardless of stats would be a huge help, but not many would be willing to go out on a limb to predict his level of play.

Maybe the trip to DC will be just what the doctor ordered for Hibbert to continue to make a positive difference.