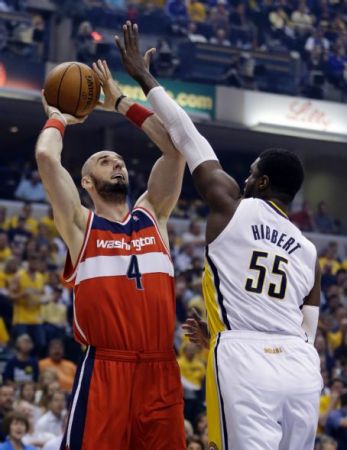 Marcin Gortat would fit right in with the Pacers – one game he struggles to score two points. Tonight, he threw in 31.

Anyone who wondered if the Indiana Pacers were capable of playing poorly again after three straight wins over the Washington Wizards got a resounding answer tonight in the form of a 102-79 beat down that wasn’t that close.

When the game ends with seldom seen Pacers Lavoy Allen and Donald Sloane on the floor, either the game was a joyous romp or an exercise in misery.  Misery is not a strong enough word to describe what Pacers fans felt as they started leaving Bankers Life Fieldhouse early in the fourth quarter.

The rebounding difference was grotesque throughout the game.  At halftime, the Wizards owned a 32-11 advantage on the glass.  For those who thought it couldn’t get worse, the third quarter proved them very wrong, as the Wizards blew that gap to a crazy 50-15.  The offensive rebound difference was 17-4, and on the defensive glass it was a horrifying 33-11.

The final deficit of 62-23 was artificially shrunk by a late surge by the Pacers bench players in mop up minutes.  For the third time in five games against the Wizards, the Pacers tied a franchise postseason record low of four offensive boards.

After three quarters, Marcin Gortat out rebounded the entire Pacers team 16-15.  Wowsers.  Maybe Wilt Chamberlain accomplished that a handful of times, but I’ve never seen it.

Gortat is a study of inconsistency himself, and tonight good Gortat showed up, leading all scorers with 31 points, hitting 13-15 field goal attempts.  This splendid game came immediately on the heels of scoring two points and grabbing four rebounds on Sunday.

So there will be a Game Six, and God only knows what it might hold for the Pacers or Wizards.  Both teams are more than capable of playing very well or terribly, and guessing which either will do from one game to the next is as foolish as fans felt tonight for their confidence in the Pacers ability to end this series in five.

Only eight times in 200+ NBA playoff series has the team down 3-1 come back to win a series, but the Pacers did not appear to be a team ready to move on to the Eastern Conference Finals.  Anyone who wants to put money on the Wizards to take the final two games of the series better find someone who was otherwise predisposed when this game was played.

Anyone who watched this slop will not be eager to invest in the Pacers fortunes.  Two Pacers finished in double figures – Paul George with 15 and David West with 17.  West led rebounders with six.  Four Pacers shared the team lead with three assists.

As awful as the Wizards looked in their 85-63 Game Three loss at home, the Pacers were at least that putrid tonight.  The effort was sporadic, and shots that normally fall somehow stayed out, usually being gobbled up by the hungrier Gortat or Trevor Ariza, who finished with 10 boards.

And so the schizophrenic Pacers season continues.  Their behavior is as impossible to predict as the moods of a menopausal woman – no offense, honey!  The rolling waves of gleeful and forlorn play are enough to require fans to gobble dramamine like tic-tacs, and if a wave doesn’t carry the Pacers to Game Six glory, coach Frank Vogel might be accused of going all George Clooney on this “Perfect Storm” of a series.

Thursday night at 8p, the next chapter of this dizzying saga will be unveiled, and if the Pacers don’t right the ship, the second home Game Seven in the NBA history of the franchise will be played.  It will also be the second in the last two weeks.