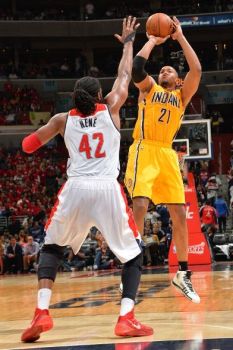 David West knocks down a 17-footer over Nene in the second half. Multiply that by nine, and that’s how the Pacers managed to hold on for the win.

Let’s just get this out of the way right at the top – David West is a man.  Not some whiny guy who is afraid to attack a challenge, but a man willing and able to put a team on his broad shoulders and carry him across the finish line – the kind of man you want on your side in a two-on-four street fight.

West might not win every time he fights, but he will always fight.

The Pacers won Game Six in Washington 93-80 (good thing home court counts for so damn much), and all starters scored in double figures, but it was West who kept digging deeper and deeper to find offense when the Pacers needed it most to the beautiful tune of 29 points.

For the next 7:21, the Wizards outscored the Pacers 19-4 to take a 74-73 lead.  The Verizon Center crowd went bananas, and if the Pacers were going to tap out, right then would have been a logical time to do it.  But West was having none of it.

On the next possession, West drained an 18-footer.  After a John Wall missed layup, West hit a 19-footer.

After a Bradley Beal missed three, and another miss off an offensive rebound by the suddenly human Marcin Gortat (19 points, six boards), Lance Stephenson converted a layup to extend the lead to five.

Then it was more of the same.  Minus a Gortat layup with 6:07 left in the game, the Wizards were held scoreless from the Bradley Beal triple that gave them the lead with 8:30 left until only 1:05 was left, and the game was over.

So now it’s the matchup everyone knew was coming when this crazy (I mean crazy in the clinical sense) season started – the Pacers and the Miami Heat.

These two teams have split their last 14 meetings, and there is no reason to believe the next six will be any different.

Dwyane Wade and LeBron James deny it, but the Heat have no love for the Pacers.  Conversely, the Pacers have no problem being respectfully repulsed by the Heat.  Somehow they manage to bring out both the best and worst in each other.

Last year’s seven-game Eastern Conference Final, won by the Heat in Miami, was the coming out party for Paul George and the rest of the cute, under-the-radar, lovefest the Pacers hosted last year.  They are no longer under the radar, cute, or in love with their teammates, but the Pacers do enjoy winning, and have been waiting for this matchup for the last 50 weeks.

Both teams are almost completely intact from last year’s mayhem.  Miami said goodbye to Mike Miller and Joel Anthony, and the Pacers bid a hasty adieu to D. J. Augustine and Gerald Green.  Replacing them are Greg Oden and Michael Beasley for the Heat, and Luis Scola, C.J. Watson, and Chris Copeland for the Pacers.

The Pacers have been a schizophrenic bunch since sprinting to that 33-7 start everyone is so fond of reminding the Pacers about.  Some nights, like tonight, they find a way to fight through adversity.  Other nights, like Game Four on Tuesday, they fail to show up.

For months, the Pacers have been waiting for this main event, and you get the feeling the Heat hoped to avoid it.

Whether that means that the Pacers will click back into a reasonable facsimile of a consistently functional team, who knows.  The name of the game is to win four before the other guys, and whether three games are lost by 40 or one, it makes no difference as to who gets to go to the finals.

It’s going to be a two-week long war, and one thing there is no doubt about – David West will be ready for battle.