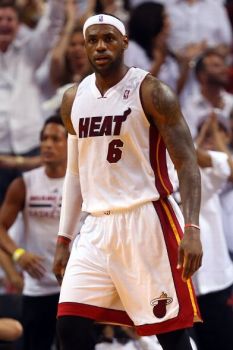 LeBron James is the best player in the world, and sending him home is going to be tough for the Pacers now down 2-1 in the Eastern Conference Finals.

The Pacers 42-38 halftime lead might have been the most precarious in basketball history.  At the downtown Indianapolis Kilroy’s, no Pacers fan felt confident, and no Heat fan was unsure they would find a way to win.

For some strange reason, I can’t believe it’s a purposeful strategic decision, the Heat begin every game playing a passive defense that allows the Pacers to move the ball without resistance to create whatever open shot they choose.  Last night, as the Heat’s defensive pressure increased, so did the Heats offensive efficiency.

Tough defense leads to easy offense for all basketball teams, but especially for the Heat.

The difference in the game – as it is with most games – was in the shooting.  The Heat made four more three-pointers than the Pacers on three fewer attempts.  That precisely accounts for the 12-point difference in Game Three.

Ray Allen and Norris Cole were both stellar off the bench for the Heat.  Allen hit all four of his three-point attempts, and Cole chipped in nine points while playing very aggressive defense.  Mario Chalmers continues to start for the Heat, but Cole plays more often and much more productively.

Game Three leaves the Heat with a 2-1 lead, and as ESPN has told us ad nauseum, teams with a 2-1 advantage have won a seven-game series 76.1% of the time.

But being down 2-1 with home court advantage is different for the Pacers.  If the Pacers can win two of the next three, a home Game Seven will follow.  Down 2-1 with Game Seven on the road means winning three straight is almost a must.

The Pacers are no less built to beat the Heat today than they were at the beginning of the season.  Paul George and David West have not played well since Game One, and that won’t hold true forever.  Both will get theirs, but the two best players in the series are LeBron James and Dwyane Wade, and that makes the Heat a very difficult quarry.

At no point in a game is that more true than during the final five minutes of a game with the score within five points.  Throughout the playoffs, the Heat have outscored opponents in that situation 41-17 with a crazy field goal percentage of 64.7% to their opponents 20.8%.

Seven-game series are made up of up to seven individual chapters of a book, and to project success or failure after three games is folly.  That said, Game Four is a big one – not essential, but big.  To lose that game would put the Pacers in a jackpot requiring them to sweep the final three against the two-time champs with a top-five all-time player.  That is the definition of a tall order.

All that work and all those dreams of getting to this spot for a chance to beat the Heat.  All the drama of the early regular season success followed by a second half malaise, and finally securing home court throughout the Eastern Conference Finals.  The comeback from down 3-2 in the Atlanta series that would have been incredibly disappointing, and another comeback against Washington landed the Pacers in the ECF, but it will take another comeback for the Pacers to advance to the NBA Finals for the second time in franchise history.