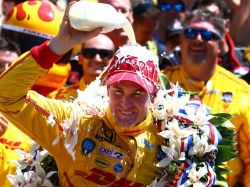 Keep the milk as a tradition, but let’s embrace some serious change at the Indianapolis Motor Speedway, including the end of the arcane local live TV blackout.

A stunningly good race, beautiful weather, and the closest thing to filled grandstands in years make a discussion about saving the Indianapolis 500 a wasteful exercise – or so the staff at 16th and Georgetown might think.

Not me, not after spending a couple of previous Memorial Day weekends 230 miles away from Indianapolis in St. Louis, where I couldn’t find a single person who gave a damn about the race, any of the collar events, or a single person under the age of 30 who knew it existed.

Not after looking at the grandstand during qualifications or practice this May to see dozens of people who sat in virtual isolation watching the mostly mundane “action.”

Don’t get me wrong, I love the Indianapolis 500 – the history and tradition, magnificent facility, dedication to honoring those who paid the ultimate price during battle all give me chills every year, and even Donald Davidson’s ruminations on all 500s past.  The first lap is the most thrilling 45 seconds in the history of sports.

The racers of the past who risked everything to wrench an extra mile an hour out of a car far less safe than the rig Ryan Hunter-Reay won in yesterday make the Indianapolis Motor Speedway hallowed ground.

I want the Indianapolis 500 to not only survive but thrive.  I want the rest of the world to understand the race for what it has always been, rather than for what its image is today.

In that spirit, here are five quick and easy ways to make the Indianapolis 500 relevant to a greater swath of people – particularly a generation that has no recollection of the days of A.J. Foyt, Rick Mears, the Unsers, Johnny Rutherford, Gordon Johncock, or Mario Andretti.

End the local TV blackout – There are so many reasons to change this bizarre and archaic policy that it could fill a book, but this is a 1,200 word post, so we will be forced to edit the list down a bit.  Back in the 1940s and 1950s, there was a notion among baseball owners that local TV would kill the live gate.  Chicago Cubs owner P.K. Wrigley was convinced that there could be no marketing more impactful than the three-hour daily commercial game telecasts on WGN represented.  For a putrid team that is not likely to win more than 70 games for the fourth straight years, the Cubs will draw far more than two-million as they always do.

Operating outside reason and logic is a great way to turn away the young.  They are smart, and when parents are forced to answer the question, “Why isn’t the race on TV?”, the answer is either “I don’t know” or a bunch of gobbledegook just as illogical as the policy itself.  Kids walk away thinking that their parents are as stupid as those running the IMS.

Exposing the young to a great civic event will engage interest and ticket sales, not repel it.  Back in the day, people waited patiently for the replay, and those who attend the race still watch, but to think that locals will plan their Sunday before Memorial Day evening around watching an eight-hour old race is nuts (especially when live in-car coverage is available on ESPN3).

Louisville allows the Kentucky Derby to be broadcast, and Churchill Downs continues to enjoy record attendance.  Those who don’t attend the day of racing either host or attend Derby parties.  It’s time that this civic celebration extends to neighborhoods.

Live TV can be the gateway drug for a whole new generation of fans.

End the fans bringing their own cooler business – This cuts close to my heart because taking advantage of the ability to bring beer and sandwiches into the track reduces cost for fans, but the revenue loss to the IMS is huge.  The logistics of selling concessions to a quarter of a million people would even depress Wavy Gravy (a very dated reference to a hippie who helped serve breakfast in bed for 400,000 at Woodstock), but where there is a buck to be made, there is a way.

Eventually, someone is going to sue the speedway for its role in not monitoring the alcohol consumption on the grounds, if they haven’t already, and why shouldn’t the Hulman-George Family make a lot of money by selling beer to the thirsty.

Monitor the lines for beer at collar events – There is nothing like an hour long wait for a beer to make concert goers or race fans intractable in their decision to never return.  During Saturday night’s Jason Aldean concert in Turn Four, the wait for warm beer was nearly that long – even in the VIP area.  There were a total of two tents and two portable carts offering beer sales, for what appeared to be 10,000 thirsty customers for those who paid a significant premium to be “VIPs”.

To say people were impatient and intolerant is an understatement.  There was a limit of two beers per customer, but  many left with entire six-packs.  It was camp runamok out there, and the vendors were unable to control the thirsty cowboy boot and jeans clad crew who asserted their own limits – or lack thereof.

When you host a party, beer must be easily and plentifully available.  If it isn’t, people find alternative arrangements.  Aldean was great, and so was Tyler Farr, but all people were talking about was the disappointing length of the lines for warm beer.

Never end a race under yellow again – There is nothing less satisfying that watching 198 laps of great racing only to see a back marker clip the wall and cause a drab finish under caution.  Drama should build throughout the race until the checkers fall, not come to an abrupt end with a couple of laps left.

The powers that be made a bold and brilliant call yesterday when they red flagged the race with under ten laps left as Townsend Bell crashed.  Sure, it might have altered the result of the race for the teams and drivers, but spectator events need to embrace the needs of spectators.

An Indy 500 should be like sex – the climax needs to be at the very end.

Ignore the traditionalists when re-building the Indy 500 – An event should be deconstructed year after year to ensure continued evolution to improve customer and participant satisfaction.  Indianapolis is very imaginative as hosts for the Super Bowl, Final Fours, and Big Ten events.  The Indy 500 should mirror that creativity, and hiring Mark Miles as the Hulman Company CEO should continue to enhance that process.

Miles is crazy smart, and knows exactly how to build fun events from the ground up.  Hopefully, he is able to get done what needs to be done year after year without interference from those who would like the month of May to return to what it was back in 1958.

Concerts, music festivals, additional races, tighter (less complicated) qualifications, and a better overall customer experience have continued to move the experience forward, but there is a lot more to be done.  My wife wants the IMuSic Fest on Carb Day and the day after.  I like it.  Why not have a Lollapalooza type show with multiple stages servicing 80,000 who then stick around for the race?

I love the direction the Month of May is heading, but with a couple of annual tweaks the Indianapolis 500 will become a must attend event for people all over the midwest.  It’s time that people in St. Louis, Chicago, Columbus, and Louisville see the magic at 16th and Georgetown as a traditional pilgrimage whose allure is more than tradition.