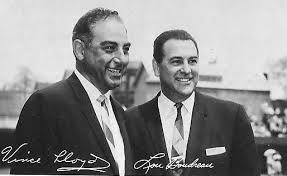 It would be very easy to crush the Chicago Cubs ownership for their greed in leaving WGN for Chicago’s CBS cluster of stations, but WGN was the change agent here.

Ratings and revenue were down because of the protracted rebuilding mess, so WGN exercised an out last year that made 2014 the last year under that agreement.

For 90 years, Cubs fans have known where to find the occasional thrills and relentless disappointment the Chicago National League Ballclub has brought to the Windy City throughout the entire tenure of the WGN partnership.

Voices like Bob Elson, Jack Brickhouse, Jack Quinlan, Vince Lloyd, Lou Boudreau, Dwayne Staats, Thom Brennaman, Pat Hughes, and Ron Santo became friends to fans as they listened over the crackly 720 AM signal that can be heard across virtually the entire country.

I came to love Cubs baseball as a kid listening to Lloyd and Boudreau on WGN, and they along with Brickhouse as the TV voice became leaders of a cadre of likeminded zealots who lived and died with every pitch.  They were like uncles for me.  I certainly spent more time with them than I did extended family members.

How important is that link between broadcaster and fan?  When Brickhouse, Lloyd, and Boudreau returned to the booth long after all had retired to do an inning of a night game, I heard their voices and I stunned myself by weeping.  I felt like Jerry on “Seinfeld” when he cried.  “What is this salty discharge?”

They were such a strong link to so many moments of my youth that hearing those voices together one last time unearthed memories no psychiatric archaeologist could have found.

When people wonder why a broadcaster past his prime continues to be paid to describe action, understanding that insanely strong emotional link between a radio voice and the team’s fans.  They become inexorably linked in a way that cannot be broken.

When the Detroit Tigers tried to replace all-time great Ernie Harwell, Tigers fans went bananas and before long Harwell was reinstated.  Vin Scully, the voice of Dodgers has been calling their games since long before their move to Los Angeles.  Dodgers fans know only that voice, and what a voice.  He is the gold standard, and when he retires, men in their 50s will cry without understanding why.

Mark Boyle, Slick Leonard, and Bob Lamey are those voices in Indianapolis, and whether or not they are on 1070 AM, 93.1 FM, 94.7 FM, or 1430 AM doesn’t matter to fans.  It’s the voice, not the station.  They are a seemingly timeless link to our youth, and both Mark and Bob have been around long enough that anyone 30 or younger only knows those voices describing Pacers and Colts games.

While the 720 AM frequency was the conduit for all that beautiful Cubs related noise, it holds no similar bond with me despite having worked there for nearly a year as an intern.

As much as I enjoy hammering the Cubs when their business office screws up – which seems to be nearly every week – they can’t be blamed for choosing another partner for their radio deal, and as long as Pat Hughes slides over I can’t imagine fans under the age of 80 will have any difficulty adjusting their dials.

With media deals, teams follow a combination of cash and relationships.  The Cubs – to their credit – are doing both.